Coldharbour Recordings, founded by Markus Schulz in 2005, is a record label focused on the more progressive shades of dance music. Originally launched as a sub-label of Armada Music, Coldharbour Recordings gets their namesake from a South London road where Schulz’s first studio was located.

Born in Slovakia, Nifra, AKA Nikoleta Frajkorova, has been engulfed in music since an early age. She started gaining interest in electronic music in her late teens, and went on to create amazing dance music which gained the attention of Coldharbour label head Markus Schulz. The producer/DJ went on to release fresh music with Coldharbour Recordings and tour the world with Schulz, while continuing to create her own tasteful brand of progressive house fused with melodic synth work and kicking percussion.

Supporting Nifra will be Dave Neven, the Los Angeles-based producer and DJ known for his unique blend of dark techno and hard bass lines, as well as Mike EFEX, a trance DJ and producer whose work has gained support from the likes of Paul Oakenfold and Tiesto.

Join us on Saturday night for this special night at Avalon as we welcome Coldharbour Recordings back to the stage for an evening of uplifting and progressive music from Nifra, Dave Neven, Mike EFEX, and Special Guest 4 Strings. 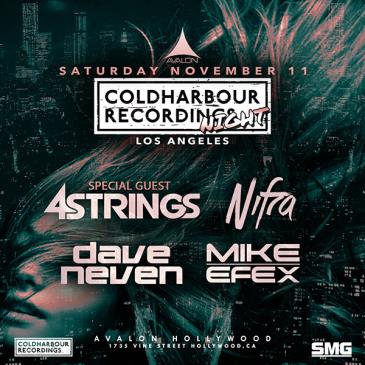