Fans will be treated to up and coming talents, Arkham Knights, Grube & Hovsepian, as well as established producer Ronski Speed and singer Adina Butar. This wide spectrum of music promises to display the diversity in Coldharbour’s roster, while maintaining the dark, heavy sound that has become synonymous with the Schultz-led label.

Consisting of brotherly duo Stuart & Ben Turner from the United Kingdom, Arkham Knights has made their mark in the world of Trance with their techno-infused style with driving percussion, heavy bass lines, and contagious beats sure to make attendees groove all night. Their singles have been listed in Top 10 Beatport Trance Charts and you can also catch them on their weekly radio show, Arkham Knights Presents: Arkham Afterhours.

Grube & Horvsepian are true products of Markus Schultz’s illustrious career. The duo began producing after hearing their label boss play a mix on his Global DJ broadcast show. Since that fateful day, the Miami natives have seen their hit singles “City of Angels” and “Venom” hit home with American and international listeners alike. Grube & Horvesepian have successfully conquered the likes of Avalon, Space Miami, Transmission Europe and their marquee opening performance for New World Punx at Mansion Miami.

Ronny Schneider, better known by his stage name as Ronski Speed is an electronic dance producer and DJ from Germany. His career started in 1997, but really took off in 2003 when his remix of Aly & Fila’s Eye of Horus received huge airplay from DJs and producers such as Paul Van Dyk, Armin Van Buuren, Tiësto, and many others. Ronski Speed has performed all over the world in almost all seven continents, having performed in countries such as Russia, China, Australia, New Zealand, Mexico, Kenya, Canada, and Poland.

Romanian singer Adina Butar is the first female vocalist and songwriter to join Schulz Music Group. Markus Schulz first introduced Butar to the world on his own radio show A State of Trance, episode 550 in Den Bosch. Butar has since propelled her career straight into the EDM scene with her most recent song being Don’t Let Go by Tenishia featuring Butar’s amazing vocals.

Coldharbour Night is a must for all trance fanatics and with performances from Arkham Knights, Ronski Speed, Grube & Hovsepian, and Adina Butar; this will definitely be a night of Trance not to miss! 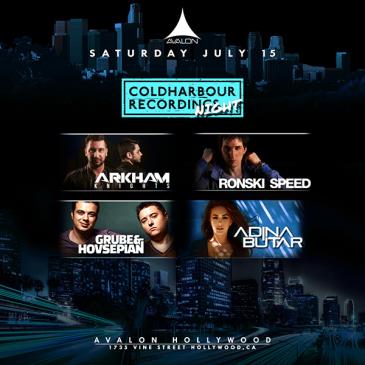