Dui Biton and Irad Brant from Israel are collectively known as Coming Soon!!! In the last 4 years they have been relentlessly pushing the progressive Psy-Trance sound, which has resulted in seminal releases on leading underground labels such as Spin Twist and Iboga. Their forward thinking futuristic music has also seen them remix some of the scene’s most respected artists such as Neelix, Captain Hook and Freedom Fighters

Somna is the trance alias of award winning producer & engineer Benjamin Leung. Alt hough a relatively new name within the trance community, Benjamin Leung’s studio work in his various aliases and co-writing projects have seen releases on labels such as Black Hole Recordings, 1605 Music Therapy, Discover, Alter Ego, Starlight Recordings, Whartone, Respekt, Tidy, Italo Business and many more.Already off to a good start, Somna’s first single with Vijo Caselle featured the vocals talents of Sarah-Jane Neild (Lost Witness / Antillas & Dankann) and was immediately signed to Black Hole Recordings alongside a licensing to the highly respected “In Search Of Sunrise” compilation series (vol. 10) mixed by Richard Durand. Jumping off from that was the remix for trance legends Hemstock & Jennings witht heir t rack "The Lamb" which became one of Andy Duguid's picks for his radio show. A list of DJs supporting Somna's music has steadily grown since the first production with A listers such as Armin van Buuren, Ferry Corsten, Markus Schulz, Richard Durand, Tritonal, Myon & Shane54, Above & Beyond, Andy Duguid, Lange, Agneli & Nelson, Giuseppe Ottaviani, Akira Kayosa, Darren Tate and more.Keep an eye out for more original material as well as remixes for Save The Robot, Glen Morrison and Jimmy Chou. 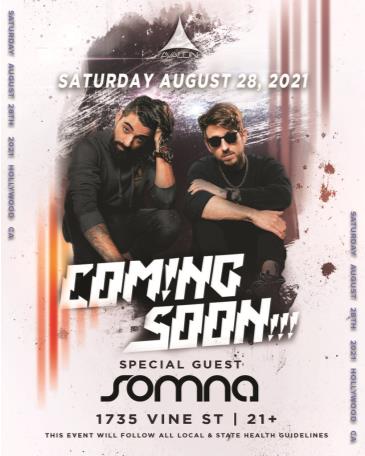