ABOUT:
There’s a moment before each Con Brio show — before the backflips, the guitar solos, the buoyant horn lines over bass, drum and synth — when all seven band members come in for a huddle. It’s a way to say grace; an acknowledgment of live music as a team sport; a moment of stillness before they explode.

“Let’s work,” they say, their heads bowed together. And then they do.

Named for an Italian musical direction meaning ‘with spirit,’ Con Brio is a San Francisco Bay Area band that plays soul, psych-rock and R&B as fresh and freethinking as the place they call home. With charismatic singer Ziek McCarter bringing “the dance moves, splits and all, of James Brown” (KQED) and a band that “comes across like a party punk version of Sly and the Family Stone” (Consequence of Sound), Con Brio is known to convert anyone who sees their electric live show.

Founded in 2013 by veteran players with vastly different musical backgrounds*, the band quickly became a favorite up and down the West Coast, then across the U.S., and then overseas in places like Japan and the Netherlands. In 2016, Con Brio’s debut LP Paradise paired uplifting dance party-starters (and some psychotropic electric guitar work from Benjamin Andrews) with powerful lyrics about inequality and the Black Lives Matter movement, instantly putting the band on the map for their earnest, inspiring, and thoroughly American ethos.

Explorer, out on July 6th, both builds on the success of Paradise and serves as a travelogue of sorts — a reflection on the two years of nearly nonstop touring that followed their first record’s success. (The band, known in the industry for their tireless work ethic, has played high-profile sets at Outside Lands, Lollapalooza, Bumbershoot, Austin City Limits, Japan’s Fuji Rock, the Montreal Jazz Festival, Australia’s Bluesfest Byron Bay, and the Netherlands’ North Sea Jazz Festival, to name just a few.)

Having proved themselves on an international stage, Con Brio breaks new ground on Explorer, expanding beyond raw energy and retro sounds toward a more contemporary, layered production style, all delivered with road-tested confidence.

On “I Wanna” — a lusty, mischievous ode to the art of catching a stranger’s eye across a crowded club — McCarter pours his voice, richer than ever, over a thick, irresistibly danceable rhythm from Jonathan Kirchner (bass) and Andrew Laubacher (drums). “Body Language” slows that theme to a simmer, with a nimble, lyrical horn line from Marcus Stephens (saxophone) and Brendan Liu (trumpet) front and center.

Songs like “United State of Mind” and “Royal Rage,” meanwhile, reflect on America’s current political moment, urging strength and perspective in the face of cynicism and apathy. Over a cheerful guitar lick from Andrews, the former track sings the praises of travel, the ways it can make the world feel bigger and smaller all at once — and how sometimes you have to leave home to see it with fresh eyes. “Rage” is a rally cry, a call to resistance, with Laubacher’s kick drum leading the march: “Feeling the world pulling apart, where is the we in who we are?” asks McCarter. “When will it end, where do we start?’

Then there’s Con Brio’s tendency to upend expectations: they’ve never been afraid of a little genre-bending. “Heart Shaped Box” began as a fun cover the band arranged on a whim on a rare day off on tour; within weeks it became one of the most exciting moments in the band’s live show. On the record, it’s a playful yet potent tribute, served surprisingly well by horns and a smart, slinky synth line from Patrick Glynn.

Ultimately, Explorer is a leap for Con Brio in more ways than one. It’s a big record, with plenty of joy, a few growing pains, and more questions than answers. What does it mean to be an American band traveling the world in the year 2018 with a message of hope and tolerance? The record sounds, unsurprisingly, like a band on the verge.

Wherever Explorer takes them, they go with open eyes. They’re ready to huddle up, take the stage, and get to work — where they’ve found that, night after night, the things that divide us don’t stand a chance on the dance floor. 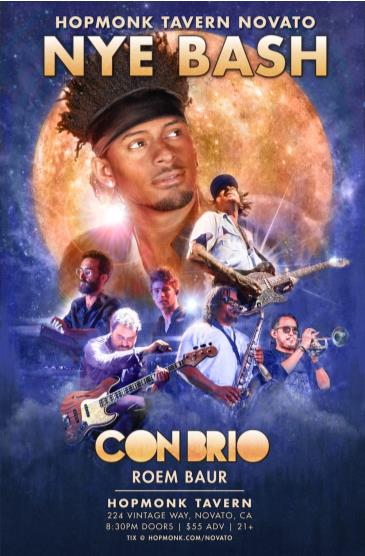