The latestfull-length from Cordovas, Destiny Hotelis a work of wild poetry and wide-eyed abandon, set to a glorious collision offolk and country and groove-heavy rock-and-roll. In a major creative milestonefor the Tennessee-based band—vocalist/multi-instrumentalist Joe Firstman,keyboardist Sevans Henderson, guitarist/vocalist Lucca Soria andvocalist/multi-instrumentalist Toby Weaver—the album harnesses the freewheelingenergy of their live show more fully than ever, all while lifting theirsongwriting to a whole new level of sophistication. The result is a batch ofsongs that ruminate and rhapsodize with equal intensity, inviting endless celebrationon the way to transcendence.

“We wanted tostrike the term ‘want’ from our music—to get rid of all the ‘Baby, baby, baby,I want this, I want that,’ and create something more useful,” says Firstman.“We needed to make sure these were songs we’d be proud to sing forever.”

But while Destiny Hotel unfolds in untold revelationson fear and ego and self-liberation, Cordovas offer up that insight withoutever slipping into didacticism. In fact, much of the album radiates utter elation,each moment echoing Cordovas’ band-of-brothers kinship and extraordinarycloseness: when they’re not touring the world, taking the stage at leadingfestivals like Stagecoach, Newport Folk and Pickathon, or hosting their ownTropic of Cancer Concert Series down in Todos Santos, Cordovas spend much oftheir time practicing in the barn at their communal farm home just outsideNashville. “I can’t imagine that many bands rehearse more than we do,” saysFirstman, whose wife and young child also live on the farm. “We’re all heretogether in this wonderful space, and we’re pretty good about never taking itfor granted.”

On the leadsingle to Destiny Hotel, Cordovaschannel their unbridled joy into a soul-soothing call for radical openness. Withits references to old country revivals and mid-’60s Dylan, “High Feeling”(which features additional production, guitars & mixing from the BlackPumas’ Adrian Quesada and additional backing vocals from the Black Pumas’ touringmembers Angela Miller and Lauren Cervantes) speaks to the pure euphoria to befound in shaking off whatever binds you (“Open up your heart, let love comethrough the door/Open up your mind, that’s what it’s for”). “That’s us tellingyou directly what to do, and hopefully in a way that’s more like Bob Marleythan some New Age guy who thinks he’s saving the world because he’s so intune,” Firstman points out.

That warmth ofspirit endures through all of DestinyHotel, and shines especially bright on songs like “Do More Good”—a sing-along-readyanthem overflowing with love for folk of all kinds (i.e., “The freaks and theprideful/The peaks and the eyefuls/The ones who just wait ’til their dreams areall stifled/Most too afraid to admit they been lied to”). Adorned with delicatepiano work and softly rambling harmonies, “Afraid No More” presents a tender pledgeto live free of fear. “In every single way, lack of awareness comes down tofear,” says Firstman. “All drugs are fear, and if we’re a worthwhilecollective, then we should be helping each other instead of letting each otherdeteriorate. It’s a song that we sing to ourselves, because we’re all here to agrand party together.” As the sweetly scrappy counterpart to that statement, “FineLife” extols the simple pleasures that light up our everyday existence. “It’sthe same character as ‘Afraid No More,’ but this is his peace time,” Firstmannotes. “He knows he’s that hippie and weed-smoker at heart, and this is hislittle prayer of gratitude for the good life he’s got.”

In many ways afull-circle moment for Firstman, DestinyHotel delivers on the promise first glimpsed on his 2003 debut solo album The Warof Women (an Atlantic Records-released effort also produced by Parker). “Italmost felt like an achievement of sport to come from where I came from and getto Hollywood, write my name on a piece of paper and get this big record deal,” recallsFirstman, who grew up in Charlotte, North Carolina. “The music that came out ofthat time didn’t really feel spiritual to me.” Though his solo album broughtsuch triumphs as opening for Willie Nelson, Firstman soon drifted into a periodof what he now describes as deliberate self-sabotage, eventually losing hisrecord deal and landing a gig as music director on “Last Call with Carson Daly.”Along with enabling him to collaborate with the likes of Thundercat and KamasiWashington—and to build his house in the then-sleepy beach town of Todos Santos—the“Last Call” job led to another life-changing phenomenon. “At the time I wasthrowing all these parties like Gatsby up in Hollywood, and this thing startedhappening where people kept leaving me books,” says Firstman. “I’d made it outto this maddening town with vultures around me everywhere, but these angelskept dropping books off—Letters to aYoung Poet, Marcel Proust, Eckhart Tolle. All of that brought me to everythought I have now.”

Since formingin 2011, Cordovas have matched their richly layered reflection to a sound that goesstraight to the soul. And on DestinyHotel, the band made a point of intensifying the body-moving power of theirmusic, with Firstman heading to L.A. several days before the start of therecording sessions and working closely with Parker to shape each track’s pulseand groove. In that process, he tapped into the instinctive sense of rhythm helargely attributes to growing up on hip-hop and R&B back in his hometown. “WhenI was a kid we used to make up rhymes in class, make up rhymes while walkingthe street,” Firstman says. “It wasn’t until I started hanging out at theparties in the suburbs with all the white kids drinking Bud Light that I heardthe Allman Brothers and saw that there was deep poetry in there, too.”

As one of themost potent tracks on Destiny Hotel,the resolute yet rollicking “Destiny” embodies an essential message thatCordovas carefully threaded all throughout the album: the urgency of livingwith clarity of purpose and, as Firstman puts it, “breaking free from the falseshell.” “It’s something we’re always asking ourselves: what are you doing andwhy are you doing it? If you can break it down exactly and really get to that why, then you’ll never have to fakeanything,” says Firstman. “This is an incredibly important time for artists andmystics and people of all kinds to challenge themselves like that, to gatherstrength and kill any stagnancy—that way, if someone asks if you can defendwhat you’re doing, the answer will be a resounding yes.”

"I'm a rolling stone / Yeah, I can't sit still,"Nelson wails on "One Way Ticket," a prime cut from their upcomingsecond album, Gran Pavo Real (out Mar. 30 via Ropeadope Records), which isSpanish for Great Peacock. Their craft is instinctual, enlivened by theirelectric and nimble playing, gripping lyrical insight and Nelson's evisceratingvocals. Their grooves run thick, like on standouts like "Rattlesnake"(a swampy, mid-tempo song that relates addiction to a slithering serpent) and"Heartbreak Comin' Down." They also manage to cut right to the bone,particularly when they deal in restraint. "Take a little time to makethings right / Make a little love in the middle of the night," Nelsonruminates on the languid and smokey "Oh Deep Water."

The tension and sweltering unease comes in waves across 10tracks, often brittle and heartbreaking, other times ferocious and sharp."A peacock has so many colors, and that's what we want our sound to belike. It's clearly rock 'n roll. It's clearly country. It's clearly folk.There's definitely blues and elements of R&B in there, too," saysNelson.

Recorded at Nashville's Sound Emporium, the album was helmed byindustry stalwart Dexter Green (Jason Isbell, Elizabeth Cooke, Derek Hoke)."He brought a strange cosmic energy," says Nelson about Green."He's sort of indescribable. You have to meet him to know who he is."

The scope of Gran Pavo Real ismost remarkable, shifting between the slow-rolling "Hideaway" to thedowncast "Let's Get Drunk Tonight" and the yearning of "All IReally Want is You." Spending very little time with overdubs or more thana few takes, the music came together within two days. My Morning Jacket's TomBlankenship lends his smart musicianship to the entire lineup. Initially, hiscontribution was on only one song, but he fell in love with the work being madeand asked to stay for the whole ride. Accomplished key player Ralph Lofton(Yolanda Adams, Jennifer Holliday) is likewise a prevalent musical forcethroughout the collection. "Ralph brought some soul to the project,"notes Nelson. "It's really great, considering we recorded it live. Thisrecord has a real human interaction type soul."

Having grown up in a rather sheltered Pentecostal household inthe suburbs of Birmingham, Alabama, Nelson tuned into the only secular music hewas allowed to listen to: the local oldies station. "What really got meinto music is the blues. When I was a teenager I really liked John Lee Hooker,Freddy King, BB King, and Buddy Guy. I think you can hear these influences inthe new songs in some ways. At an early age, I learned how hitting the rightchords at the right times could really mess with somebody's emotions."

It wasn't until he was 14 years old that he heard LynyrdSkynyrd's "Free Bird" for the first time, and it changed everything."When I heard the guitar solo, I freaked out. I went downstairs andstarted playing my brother's guitars when he wasn't home. I taught myself howto play because I loved that song so much. I would get my ass kicked forbreaking his strings, though. I had to learn fast, and I knew I wouldn't get aguitar from my parents if I didn't already show some interest or effort."

Later, when he was 18, the next piece of the puzzle fell intoplace. His father had just passed away, and on the ride home from the funeral,his sister, "who always had really good taste in music," as Nelsonremembers it, put on Ryan Adams' "When the Stars Go Blue." Theperformance crushed him. "I started hearing all the little country influences.I thought it was awesome. I didn't know I liked country music. Then, I wentfrom Ryan straight to George Jones. From that moment on, I became way moreobsessed with country music than rock 'n roll."

After college, he moved to Nashville to pursue his musicalcareer and that's where he met bandmate Blount, who "grew up on '90scountry." The pair hit it off almost immediately. "We instantly wentout and got a case of beer and shotgunned them. We started playing and writingsongs together. We found out we sang together pretty well."

Late one night, when they were drunk on Bushwackers, GreatPeacock was born. "We jokingly said we were going to start a folk band,and we wrote a song called 'Desert Lark,'" recalls Nelson. Close friendsand family raved about what they had nonchalantly created. The band soon becamea reality in early 2013, and their debut album Making Ghosts arrived two years later.

On Gran Pavo Real,the band spread their wings and easily glide into bolder territory ⎯⎯without sacrificing their genre-bending artist stamp, of course. Americanamusic is a state of mind, a way of living fraught with stories of heartache,lonesomeness, and desperation. That is certainly the case for Great Peacock,whose style is an amalgam of American design bred of southern tradition. 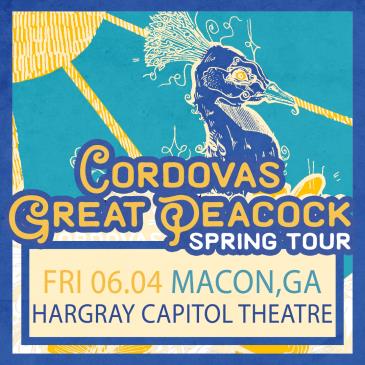