with
The Velvet Teen
The Speed of Sound in Seawater

Covet started in 2014 asa bedroom project by guitarist Yvette Young, who at the time, was balancingwriting music part time with working as an art teacher. Over the years, theproject has certainly grown beyond its “Bay Area garage band” roots and has beenfortunate enough to reach people all over the world- enough so that Youngeventually left her teaching job to pursue making music with a bandfull-time.

With a background invisual art, art therapy/education, and classical piano/violin, Young aims to writeemotive songs that capture colorful imagery, uplift, and tell stories. Theirsound can be described as “instrumental progressive rock” but the music drawsinfluence from many genres like Midwest emo and shoegaze and doesn’t try toadhere to one main sound. Young’s fluid and polyphonic fingerstyle approach toguitar is often described as very piano-like, and although her playing atsurface level is technical and intricate, the music still aims to make peoplefeel something and make people want to dance.

The band has released anEP Currents, an acoustic EP, and 2 full length albums Effloresce andTechnicolor. Over time the sound has really transformed from its twinklymathrock origins to a more evolved, fuller, more melodically complex sound thatincorporates a myriad of tones and textures. There is currently one new albumin the works, which the band will be playing songs from. 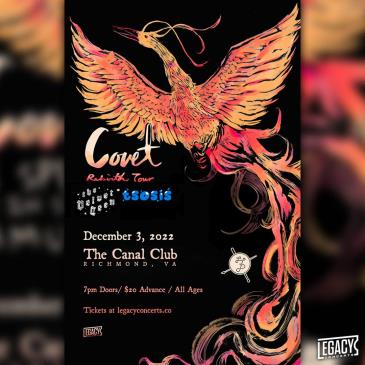 The Velvet Teen / The Speed of Sound in Seawater