Get ready for a night of filthy dubstep this Friday, November 24th at CONTROL AVALON, with bass music legends Crich Crich, Nathaniel Knows, Nytrix, and Sluggo.

Hailing from Houston, Texas, Crichy Crich is one of EDMs newest rappers making a mark in the industry. Although just starting out in the electronic music world, Crichy already has tracks underway with established artists Borgore, Jauz, EXSSV and RiFF RAFF. His infamous antics, including a viral video of him getting a tattoo of Tara Reid’s name, have enthralled his fans who can’t seem to get enough of the lively rapper.

Nathaniel Knows is a DJ/Producer from Tuscon, AZ who started out in 2008. Known for songs like “From The Back” and “Fly Away”, his bassy beats have made him a well-known party-starter on the West Coast. His popular, and often controversial, social media presence gives him a deep connection to his loyal fan base who loves to party (almost as much as he does). His outrageous style combined with Crichy Crich’s animated lyrics will be an electrifying pairing you won’t want to miss.

Crichy and Nathaniel will also be joined by Nytrix and Sluggo. Nytrix is a DJ/Producer based in Los Angeles, and his tracks have been featured on several charts including Billboard Dance and Beatport Top 100. Making beats since highschool, Nytrix is a seasoned DJ/Producer whose experience shows.

Additional tracks will be supplied by Sluggo, a dubstep producer and DJ from Phoenix, AZ with several new releases including “Hate Me” featuring Slippe. Sluggo may be most well known for his ferocious dubstep beats, but his recent exploration of other genres and styles has crafted a unique sound that allows him to flourish in any setting.

Bass heads unite under the Avalon roof this Friday, November 24th for a night of thumping bass and unmatched drops. Grab your friends and head to Hollywood to witness sets from Crich Crich, Nathaniel Knows, Nytrix, and Sluggo.

Combine the iconic AVALON Hollywood and a constantly evolving roster of boundary-pushing electronic acts and you've got the recipe for CONTROL LA. Born in 2008, the weekly phenomenon stands as the longest running nightlife party in the states and maintains its ground-breaking music programming by showcasing the strongest up-and-comers with festival headliner potential. Previous years have seen the likes of an early Skrillex, along with acts like young Zedd, Wolfgang Gartner, Porter Robinson and a pre-"Turn Down For What" DJ Snake all having graced the CONTROL stage, it's safe to say the Friday event is the premiere stop for DJ prodigies. CONTROL has sounds for everyone, diversifying its lineup with an array of hip-hop artists including Mystikal, Zaytoven, and DJ Premier. Each CONTROL LA lineup is invariably ahead of the curve and adds to the over 4,000 bands and DJs who have already performed at the renowned event. 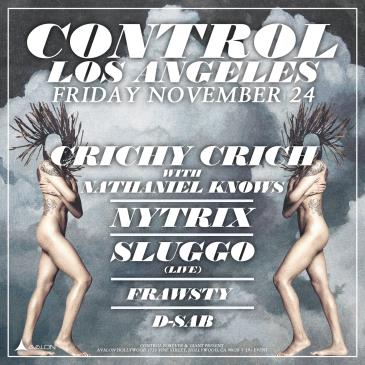