A bustling boulevard in the heart of Milwaukee provides a colorful backdrop for the latest album by folk duo Dead Horses. Brady Street, which is due out on August 12, 2022, is Dead Horses’ first full-length release since their arresting 2018 record, My Mother the Moon. The last album charted on the Americana Top 50 radio charts for three consecutive months. The single “Turntable” accrued more than 35 million spins on Spotify and was also featured on the Amazon and Apple Americana playlists. The pair’s select media highlights include a Rolling Stone “Artist You Should Know” mention as well as profiles in Billboard, Noisey, and even independent global news publication Democracy Now!

For their fourth full-length press, the pair decided to stick to their roots and record at Honeytone Studios in Neenah. “We wanted to produce something that seemed true to us, so we opted for a closer-to-home
approach” explains Daniel Wolff. “The experience allowed us to dive in and out of the studio and really work with the individual songs and the overall feel of Brady Street. Because of this, I believe we created a set of songs that contain a wider variety of sounds and textures that we knew were possible for us but didn’t have the chance to accomplish yet based on our previous recording strategies.”
"I feel that Brady Street is a coming-of-age record for us – both musically and thematically,” Vos shares. “In some ways, Brady Street is an answer to My Mother the Moon. The latter was written and recorded in the midst of working through childhood traumas and first venturing out on my own. Brady Street is less naive, more gritty, more focused.” Brady Street takes the intimacy of nature and brings it into the oftentimes reckless city life. Instead of walks through the forest, the songs take the audience on walks through the city, past all the old churches and bars with rich histories. Both records are filled with songs of hope and the search for beauty, as well as compassion for others, especially strangers. Written primarily throughout the COVID lockdown, Brady Street turns inward and reflects the introspection many of us encountered over the course of the often-melancholy pandemic.

Since the band’s early days, Dead Horses has been something of a fluid project centered around Sarah and Dan but has also welcomed other like-minded musicians for recording and touring. The band's seemingly dark name is a loving tribute to a former friend of the band who passed away due to struggles with opioid abuse. To this end, Vos says, “Our music is about hope and joy, all while sharing an important message that you’re never alone in your battles.”

The union of Sarah’s emotive songwriting and Dan’s intrepid bass playing transcends the
singer-songwriter-with-backup-musicians paradigm. Dan’s adventurous musicality equally shines alongside
Sarah’s songwriting sensibility. To date, Dead Horses has released three albums, two of which have been
produced by Ken Coomer of Uncle Tupelo and Wilco, an Audiotree Live Session, three singles, and a
five-song EP.

Dead Horses is thrilled to support Brady Street with tours across the United States. Over the years, the road has become somewhat of a second home for Sarah and Dan. “Connecting with people at shows and being open together breathes new life into everything,” Sarah notes. “You can go somewhere and feel like a total stranger or a lost tourist at first,” as Dan perfectly describes the sensation of performing, “but once you hit the stage, you feel like you’re part of an all-too-familiar community.” 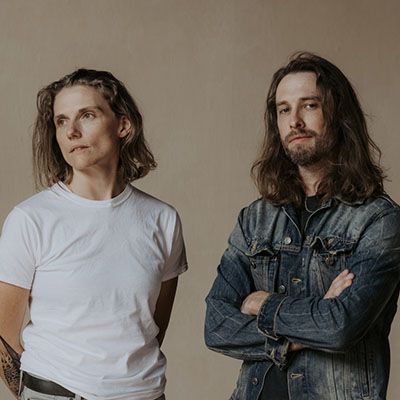