The story goes that Hammond b3 organist Delvon wouldregularly lug his 400-pound instrument from venue to venue barely breaking evento play other people’s music, and Amy just got tired of it. She fiercelybelieved in Delvon’s talents, and, eventually, she made an offer he couldn’trefuse: If Delvon picked the musicians; she would take care of all the businesssurrounding it.

“I was watching an amazing talent being marginalized. Hewould be getting paid like $75 a gig and be spending $60 in gas to cart aroundhis instrument, sometimes even renting a U-Haul. It wasn’t fair,” says theself-made music mogul who may be the first person to legally own a band. “Foryears, Amy had been telling me to step out from being a sideman. This was anatural move. Now, I can just play music and not worry—it’s been a welcomerelief,” Delvon says.

The Seattle-based trio’s music is best described as “feelgood music.” DLO3 conjures the smoky 1960s jazz stylings of Jimmy Smith andBaby Face Willette, and the snappy soul strut of Booker T. & The M.G.’s,The Meters, Dr. Lonnie Smith, and Charles Earland. Within DLO3’s distinct jazzstew, are also dashes of Motown, Stax Records, blues, and cosmic JimiHendrix-style guitar. It’s an aesthetic that only these three could muster, asthese are the sounds and vibes imprinted in the trio’s DNA.

Live, the band is telepathically musical, easing throughimprovisational ideas, grooves, and extended jams with silken swagger. Theexhilarating live experience also showcases the band’s deep personal connectionwith witty between-song repartee, vignette song stories, and unpredictablydynamic flights of in-the-moment musicality. This live connection carries overinto the studio and into the band’s compositional approach. Much of the band’srecorded repertoire is written on the spot, during soundchecks, on thebandstand, and in the studio. The trio’s trusted connection makes for awellspring of soulful ideas ever present.

The three-piece group started in May, 2015 at Amy’s behest,and since then has issued two Billboard-charting albums and a 45. In the nearfuture, DLO3 will be releasing a bevy of new music come fall and winter 2020.

It’s rare for an instrumental band playing tradjazz-inspired music to make such waves in the post-auto tune era. But thethree-piece has quickly made a name for themselves through incendiary liveperformances, including a feature on Seattle’s KEXP’s “Local Artist Spotlight”;a live performance at Upstream Music Festival broadcast by KEXP that garneredover 7 million views; and numerous national and international tours andperformances.

Other select highlight include their debut album, Close butNo Cigar, nabbing the Billboard  ranks of#1 Contemporary Jazz and #3 Jazz Album, and their Live at KEXP! hitting #10Jazz Album and #20 Heatseekers Album. Performance highlights include DLO3appearances on Adult Swim’s “Live on Fish Center,” a Day Trotter Session, and alive recording at Paste Magazine studios. In addition, the group has performedat Montreal Jazz Festival, live on Parisian TV, and at the 71st Monaco RedCross Ball which featured John Legend. The trio has also earned coverage fromRolling Stone (Italy), Chicago Tribune, and Seattle Times. In addition to theseaccolades, DLO3 also enjoys the pleasure of being part of the hip ColemineRecords family, and being booked by the powerhouse Kurland Agency.

Besides prodigious talent and a rare chemistry, one secretto DLO3’s success has been manager/den mother Amy Novo who heads up NovoProductions LLC. Amy is affectionately referred to as “Shortcake” by the band,and has been called “mafia” by some industry professionals, resulting in themodified nickname, “Shortcake Mafia.” She lives up to the image with sharpbusiness instincts, fierce determination, almost maternal love of her band, anda charismatic and passionate approach to connecting with fans and industryprofessionals. Amy was born into a musical and creative family, and she has adeep appreciation and understanding of music and the artist’s way. Prior toDLO3, though, she didn’t have music biz experience, but her instincts and herstrong DIY enterprising ethos have made DLO3 a global groove phenomenon.

It’s been a profound journey for DLO3. Years ago, Amy wouldhear Delvon lament about fearing being the local legend who never wentanywhere. Today, through her tireless work ethic, and his bottomless talent,the power couple have taken the Delvon Lamarr Organ Trio beyond their wildestdreams. “I used to listen to the old jazz greats and think about their Europeantravels. For years, I thought it would never happen for me, and then Miss Novomade it happen. Without her we would still be in the basement,” Delvon marvels.Amy adds: “I’m not a salesperson—I can only do something I believe in—butDelvon is so talented, and I am passionate about keeping his music alive. Ifight for the artists I work with.” 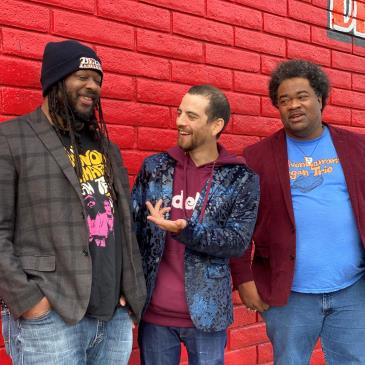