Orlando native and Los Angeles transplant, DallasK, is an American DJ and record producer well known for his collaborations with big names, Tiësto and Hardwell. He is signed on to some of the biggest record labels in the industry such as Revealed Recordings and Ultra Music; consistently drawing in listeners with his energetic electro house sound. His music is featured on virtually every major blog and his live sets never disappoint as DallasK likes to draw influence from all genres of dance music.

DJ Kash is a name to look out for as he is a fast up-and-coming artist popular to the Electro, Progressive, and House genres of dance music. Having started his DJ career out in Europe, he is now bringing his talent to the beautiful West Coast where he has quickly garnered the interest of big names like Cedric Gervais, Deorro, Ghastly, Deorro, and more.

Consisted of duo Sniper Jones and Nandicimo, otherwise known as Alex Murillo and Brian Canas, SJXN is a Techno-Electro DJ duo who knows how to throw down hard. While working together as a duo, both men also like to DJ and produce in their own time; with Sniper Jones having released several mixes on Soundcloud titled “Mind of Sniper”.

Born in South Alabama before moving to Los Angeles to pursue his full-time career in music, William Parker, otherwise known as A!rhound will be bringing his good vibes to the Avalon stage in support of DallasK. He is well-known for his radio podcasts titled “Houndsbooth” and his most recent single, “Rude Boy” featuring Regimental Oneton.

Join us and DallasK, DJ Kash, SJXN, and A!rhound at Avalon Hollywood on Saturday, July 22nd for a night of contagiously upbeat music and good vibes all night long. 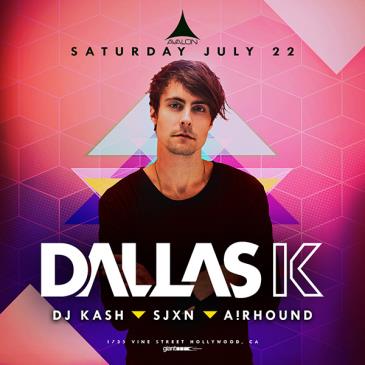