Orlando native and Los Angeles transplant, DallasK, is an American DJ and record producer well known for his collaborations with big names, Tiësto and Hardwell. He is signed on to some of the biggest record labels in the industry such as Revealed Recordings and Ultra Music; consistently drawing in listeners with his energetic electro house sound. His music is featured on virtually every major music blog and his live sets never disappoint as DallasK likes to draw influence from all genres of dance music.

New York native Brav0 is set to spin wild tech bangers to get the night fired up. As the label boss of Soniquarium, Brav0 has released remixes that have charted on Beatport’s Top 100 for Progressive House, Psy-Trance, and Trance. His live sets are deep and designed with emphasis on low ends, so be prepared for some body-rocking tracks.

Japan’s Meirlin is returning to the AVALON with a back to back set with DJ Lucd. Having performed at almost every major venue in SoCal, including Heat OC, Belasco, and Anime EXPO, Meirlin is not a stranger to killing the dance floor in front of large crowds. Combined with the incredibly talented DJ Lucd, Meirlin B2B Lucd is a force to be reckoned with.

Los Angeles natives Baylienz is also joining the wild lineup with their unique take on trap which they call triptrap. Influenced by such names as Flosstradamus, What So Not, and RL Grime, the duo is ready with their arsenal of melodic and filthy trap bangers for the night.

Get ready for this wild night of music at the AVALON Hollywood with DallasK for your go-to New Year’s Eve EVE celebration. 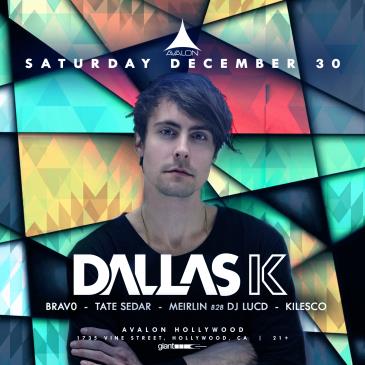