Sizzlinghot guitar solos. Smooth and soulful vocals. High-energy stage performance.Backed by a rhythm section that is second to none, this IS Dennis Jones. Checkout a live show, and you’ll instantly agree, this band ROCKS the blues like NOother!

Dennis’sfeet are firmly rooted in the past, yet his heart and soul are connected to thepresent. He writes songs that seamlessly blend the best of both worlds,presenting a unique and  contemporarystyle of American rock and blues.

Since 2003, Dennis Jones has released 7 successfulCDs, and a DVD, on his own label, Blue Rock Records. Each and every one ofthese has met with rave reviews. All are still being played on blues &roots radio stations in the US and around the world.

He also spent a few years playing guitar with TheBus Boys (the boys are back in town) and with The Zac Harmon Band, when theywon first place in the 2004 Blues Music Awards Competition.

From Orange County CA Harlis Sweetwater is a independent national touring Rock /Blues artist. Aside from headlining  venues, events and festivals across the U.S., he has been direct support for such notable artists such as ZZ Top, Los Lobos, Blues Traveler, Christone "Kingfish" Ingram,  and Jimmie Vaughan to name a few.

Richard T Bear boasts a career that spans more than 40 years, one that led to a string of solo albums and collaborations with numerous music icons. In 1978, he signed with RCA Records and released his debut album, Red, Hot, and Blue, produced by Jack Richardson (Bob Seger, The Guess Who) that featured Les Dudek, Billy Squier, Paul Shaffer, and the Brecker Brothers. The album spawned the single “Sunshine Hotel.” A remix of the song reached the top five on the world dance charts before becoming the dance staple that it remains today. A second album followed titled Bear that includes a rendition of the Rolling Stones ’classic “Ruby Tuesday” and Captured Alive, a concert recorded in Hamburg, Germany. In 1984, he moved to Teldec Records, which led to the release of The Bear Truth, and the Giorgio Moroder produced album The Runner.
He has appeared on many recordings including Crosby, Stills and Nash's "Southern Cross," The Blues Brothers Soundtrack, Richie Havens Mixed Bag II, Kiss members Gene Simmons and Peter Criss' solo ventures, as well as Toby Beau’s hit single “My Angel Baby,” Billy Squier’s solo debut Tale of the Tape, and former Rascals Gene Cornish and Dino Danelli.  He would also pen the song "Love and Pain,” one of the standout tracks on Cher's blockbuster album Take Me Home.  He has shared the stage with artists such as Richie Havens, Odetta, The Doobie Brothers, and Jeff Beck, to name a few.
Domestic responsibilities and a struggle to regain his sobriety forced him to put his musical career on hold. In 1983, T Bear focused on helping other musicians with their addictions and became instrumental in developing the Musicians Picnic, serving on its board of directors. The annual event led to the creation of the Musicians Assistance Program (MAP), a non-profit organization that is now part of the Recording Academy’s MusiCares Foundation. 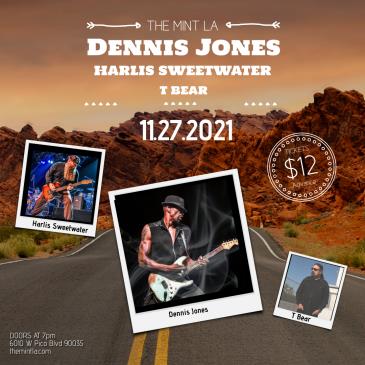