Derek Richards On The Main Stage

See comedians Derek Richards and Bob Kubota LIVE on the main stage of the historic Orpheum Theater in Downtown Flagstaff!

A regular on the Las Vegas Strip, Derek’s act is fast, fresh, and at times, fanatical. He brings the funny with tales about his blue-collar upbringing, his divorce, the holidays and his child-free existence. A veteran of several USO tours, Richards was chosen as one of the first performers at Guantanamo Bay, Cuba after the base began guarding jailed Al-Qaeda terrorists. The comedy tour earned Richards national coverage in Newsweek. He also has performed at U.S. base camps in Iraq, Afghanistan, and more than 15 countries.

You can hear him on the air via the SiriusXM Satellite Radio Network and on the nationally syndicated, Bob and Tom Show along with Bob and Sheri. He was also featured on The Weather Channel's Top 10. On the concert stage, he has been the opening act for Motown legends, The Temptations and The Four Tops. His third comedy album, 60 MPH School Zone, garnered Honorable Mention accolades in the International Songwriting Competition in the spoken word comedy category. Get your copy at shows, iTunes and at derekrichards.com. Hit the site to hear a sample of why this lunatic leaves every audience howling, and hoping he’ll be back. He's also the author of Whiskey, Cancer & Bad Decisions, now available on Amazon.

Bob Kubota began his career as a stand-up comedian while still a student of journalism at Arizona State University. Encouraged by virtually no one, he honed his particular idea of humor at "open mic nights" sponsored by various saloons and bistros throughout the Greater Phoenix area. Within two years, Bob was "on the bill" for paying customers at legitimate comedy clubs. Only then did he let his parents know that his life dream didn't include bar exams - just bars. His penchant for dry wit, lighthearted sarcasm and deciphering life’s ironies has led him to the majority of the contiguous 48 states as well as Alaska and Hawaii. The sly take that he has on his own ethnicity continually proves to be a popular feature of his act. In 1996 he became an international performer when he joined the United Service Organization (USO) and now tours regularly with Armed Forces Entertainment's BATTLE COMICS (Barnhart Entertainment) providing comic relief to American military troops stationed around the globe. Bob has now spun his material in Iraq, Afghanistan, Pakistan, Bahrain, Italy, Spain, Portugal, England, Iceland, Hungary, Belgium, Bosnia-Herzegovina, Japan, Korea, Singapore, Diego Garcia, Australia, Haiti, Honduras, Cuba, Kosovo, Germany and many more. He has also performed in Hong Kong for English-speaking residents of the city’s bustling business and finance community. Tours coming up in 2017 include trips to Spain, Italy, Portugal, Turkey, Jordan and Egypt. 2017 also premiers the acclaimed documentary "I Am Battle Comic", in select cities. Producer/Comedian Jordan Brady follows Bob and fellow comics Don Barnhart, Jeff Capri and Slade Ham throughout their journey to Afghanistan, Bahrain & Kuwait entertaining the soldiers in March, 2016. Bob is also a headline act on the Norwegian Cruise Lines (NCL) Getaway, Epic & Escape, which has taken him all over the Carribean & Virgin Islands. Currently scheduled: 10/14-10/21 The Escape. His television appearances include: Last Comic Standing / The Invitationals 2014 (NBC), An Evening at the Improv (Arts & Entertainment Network), Caroline’s Comedy Hour (A & E), Half Hour Comedy Hour (MTV), Stand-Up Spotlight (VH-1), Funny is Funny (“Si” TV) & Make Me Laugh (Comedy Central). Mr. Kubota is also a world-class exponent of deceptive sleight-of-hand. Do not play cards with him. He currently resides in Phoenix, Arizona where he is spending the rest of his days trying to teach his rescue dog to play golf. 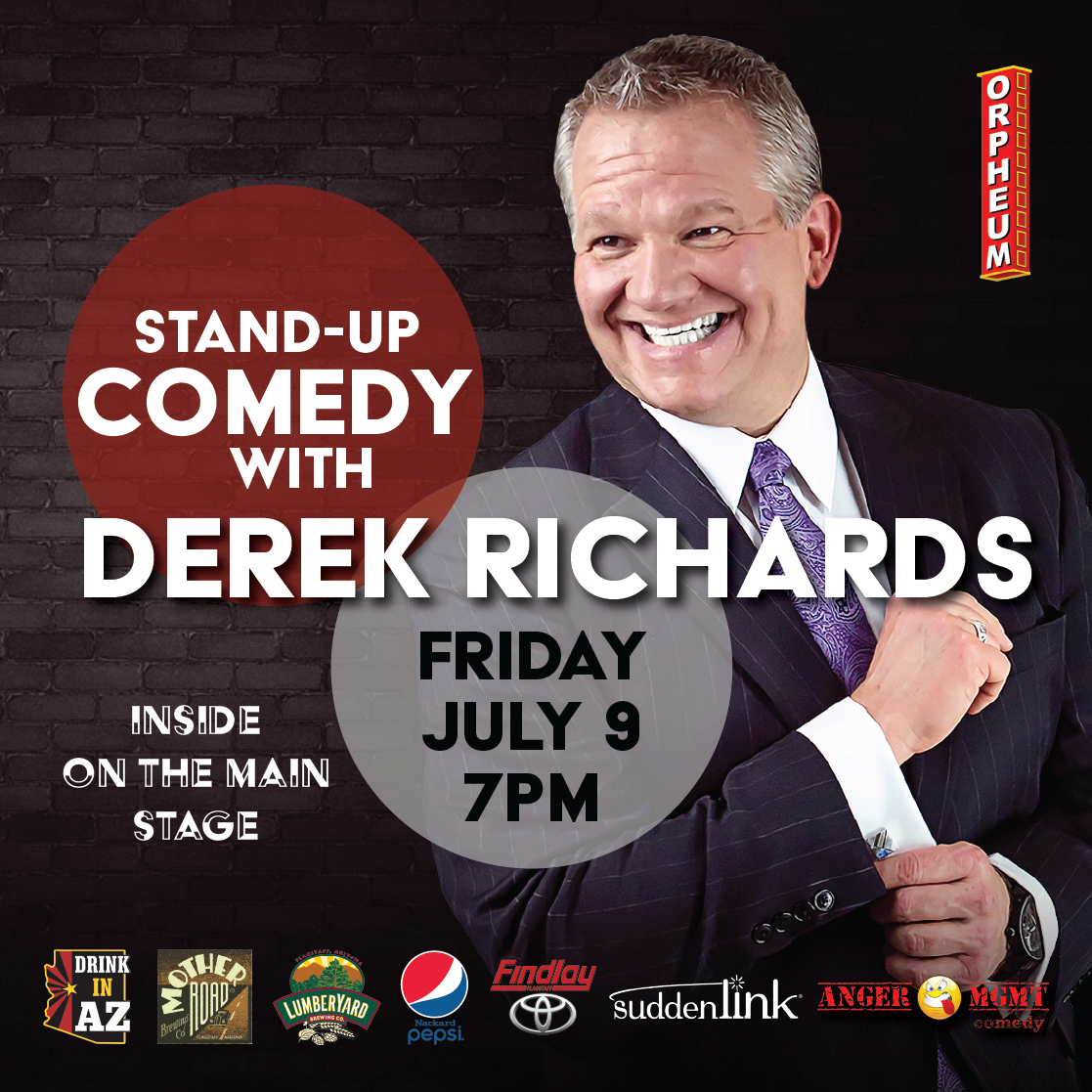 Derek Richards On The Main Stage