Together with their countrymen Kreator and Sodom, Germany's Destruction constituted the dominating triumvirate of Teutonic thrash metal during the 1980s. And even though they ultimately failed to match these peers in terms of commercial success and longevity, at least two of their albums still qualify among the crème de la crème of the decade's speed metal. Heavy metal underwent a worldwide revolution in the early '80s, when the lingering lessons from '70s giants like Black Sabbath and Judas Priest crashed head-on with the D.I.Y. ethos of punk rock and the sheer velocity of Motörhead to spawn the much-ballyhooed New Wave of British Heavy Metal, which, in turn sparked a far more powerful and lasting bastard offspring: thrash metal. Of all the nations contaminated by this musical virus as it proliferated unchecked, Germany was second only to the U.S. in terms of widespread infection.

Among its earliest contenders was Hamburg's Helloween, Essen's Kreator, and, from the town of Weil am Rhein in the Fatherland's southwestern tip, Destruction. Formed in 1983 from the remnants of an earlier band named Knight of Demon, Destruction brought together towering vocalist/bassist Marcel Schirmer (aka Schmier), diminutive guitarist Mike Sifringer, and drummer Tommy Sandmann. Looking to take advantage of the bustling worldwide tape-trading network responsible for breaking most of the '80s biggest heavy metal bands, the trio immediately set about recording and circulating its Bestial Invasion demo to critics and fans alike. It wasn't long before Germany's own Steamhammer label came calling with a record deal, and Destruction's Sentence of Death EP was released in 1984, soon to be followed by 1985's Infernal Overkill LP. Both of these were surprisingly proficient affairs fueled by raw aggression and youthful energy, and Destruction toured Germany with Slayer later that year before taking part in the legendary WWIII Festival in Montreal, Canada, alongside Celtic Frost, Voivod, and other rising stars of extreme metal.

Once they returned home, the bandmembers got to work on their second album, 1986's well-received Eternal Devastation, but lost founding drummer Sandmann shortly before heading out on the road again, this time with fellow Teutonic thrashers Rage. Thankfully, Sodom's Chris "Witchhunter" Dudeck was able to step in until they could find a permanent replacement in Oliver Kaiser. Additional guitarist Harry Wilkens was also brought on board at this time, and, after testing this new lineup on 1987's Mad Butcher EP, Destruction delivered what many consider their finest album, 1988's Release from Agony. Not all fans were in agreement, however, as the newfangled quartet's far more technical, almost progressive-leaning direction also rubbed hardcore constituents the wrong way. Being chosen as the opening band for Celtic Frost's disastrous Cold Lake tour was another unexpected setback, and, confirming that things were not right within the Destruction camp, popular frontman Schmier was unceremoniously sacked shortly after the release of 1989's Live Without Sense to make way for "more capable" replacements in vocalist Andre Grieder (ex-Poltergeist) and bassist Christian Engler.

Feeling betrayed, upset fans made their feelings known by staying away in droves from 1990's Cracked Brain album, as well as subsequent offerings like 1994's Destruction, 1995's Them Not Me (both EPs introducing new vocalist Thomas Rosenmerkel and guitarist Michael Piranio), and particularly, 1998's career low The Least Successful Human Cannonball. Schmier, in the meantime, had formed a new band called Headhunter and busied himself with the operation of his own restaurant, but he couldn't resist the opportunity to finally reunite with former partner-in-crime Sifringer and drummer Sven Vormann; the trio relaunched Destruction at the dawn of the new millennium. Since then, 2000's All Hell Breaks Loose, 2001's The Antichrist, and 2003's Metal Discharge (featuring drummer Marc Reign) have been released by Nuclear Blast, and 2005's Inventor of Evil, 2007's Thrash Anthems, and 2008's D.E.V.O.L.U.T.I.O.N. by AFM Records.

Destruction returned to the Nuclear Blast fold for 2011's Day of Reckoning, which would be the first album to feature new drummer Vaaver. Spiritual Genocide dropped the following year and coincided with their 30th anniversary. Under Attack, the band's 14th studio long-player, dropped in early 2016. A sequel to 2007's Thrash Anthems (aptly named Thrash Anthems II) arrived in 2017 and was followed two years later by the full-length Born to Perish. 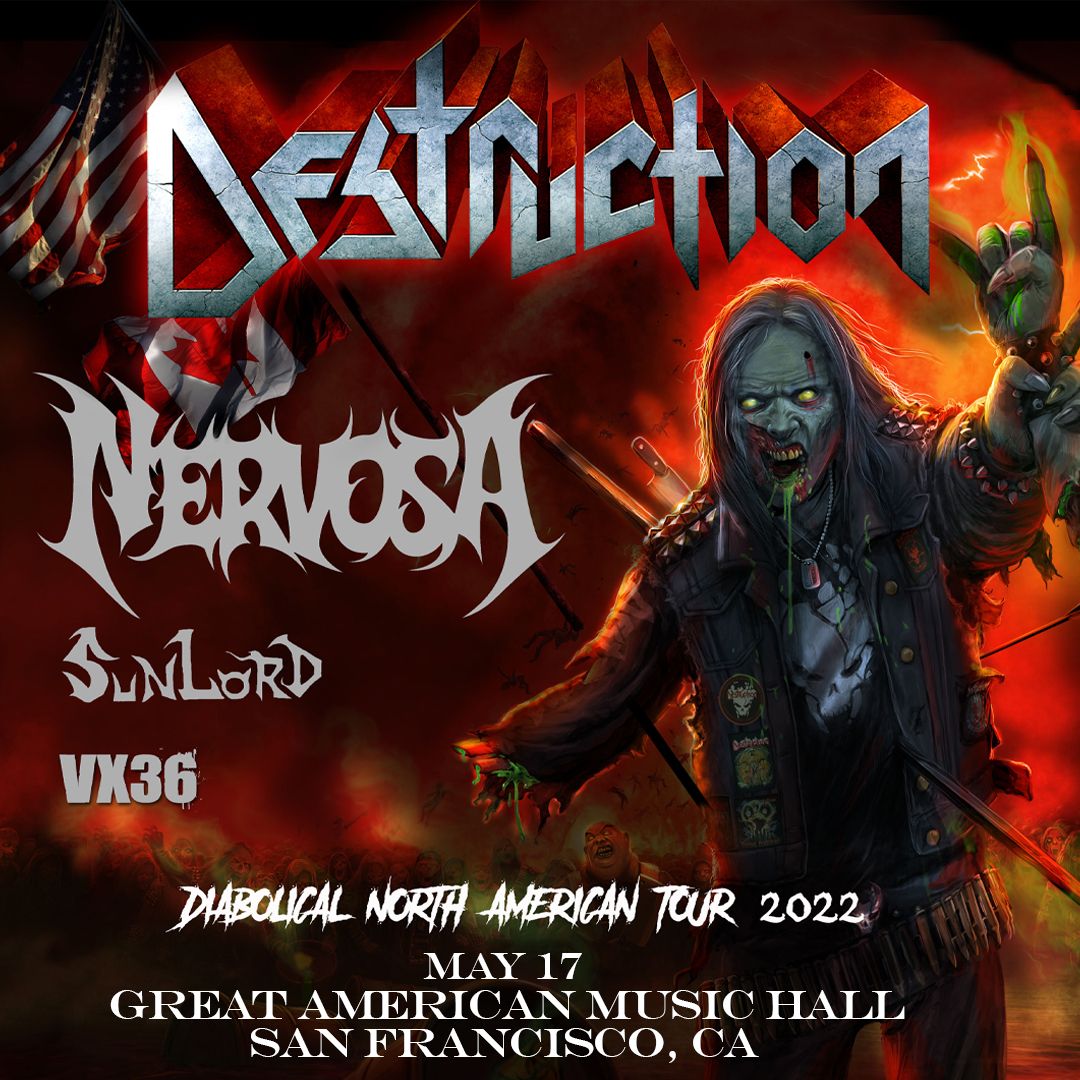