This Rocking, Funky, Soul Band Sensation from NorCal is the Hot Live Party at BooM BooM RooM ...
~Second Wednesdays of Every Month is the 'Diggin Dirty Hump-Day Residency'~
starring...

DIGGIN DIRT
began planting its roots back in 2011 in the town of Arcata, CA in Humboldt County. The newly conglomerated 8-piece band had instant chemistry, and after only a few months of playing together, released their Full Season LP. Their debut album is comprised of 11 tracks that showcase musical influences ranging from afrobeat, reggae to rock, but always with an underlying theme of funky soul.

The band began touring in the spring of 2017 throughout California and Oregon, and was met with a tremendous response. A reputation of quality original music backed by high energy performance grew around the Dirt’s name, and in turn inspired them to keep growing. A byproduct of this growth is the recently released Bedrock EP. Showing more musical maturity and a new depth of identity, the album is a true sign of more to come.
The Dirt is more inspired than ever, and ready to bring the music to the people. With more expansive West Coast tour dates, and fresh material coming out of their preparations, the group shows no signs of slowing down as they expand their reach. Earn that paycheck, and dust off those dancing shoes because we’re looking at you tonight! Keep checking in on this funky force, and make sure to come out and groove at BooM BooM RooM on the 2nd Wednesday of Every Month.

SUPER AMAZING FUNKY NIGHT OUT at BooM BooM RooM !
The crowds of fans are growing and growing with everyone talking about Diggin Dirt ... #Best #Band #Livemusicsf #Recommendation #DigginDirt 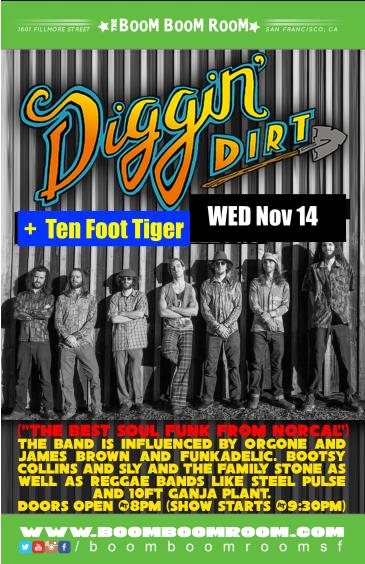