AVALON Hollywood is having a Friendsgiving special with a serving of underground madness.

Doorly is a master of the underground; having released on Relief Records, Hot Creations, and the ever-notorious Dirtybird Records, the producer has proven his expertise in production and the ability to write a unique hit.

Also joining Doorly is London and Ibiza based Infinity Ink whose laidback and serene dance tracks evoke the most intimate and energetic club sets. The duo comprises of international stars Luca Cazal and Ali Love, and has seen releases on power labels Hot Creations, Crosstown Rebels, and Different.

Todd Edwards is a legend in the UK garage scene and is credited as one of the pioneers of the genre. Edwards is Daft Punk’s go to collaborator, having appeared on two of their albums via co-production and topline features; he even earned a Grammy with collaborating with icons Daft Punk for the track “Fragments of Time” off the Random Access Memories album. He is undoubtedly a writing and producing mastermind.

Deep Aura is a music label founded by SoCal local Holliday Panasith as a showcase for ambient electronica, downtempo, house, and techno. With the mission to deliver the most evocative and transcendent sounds that underground has to offer, Deep Aura artists are delicately handpicked to carefully highlight the most profound experiences of electronic music. 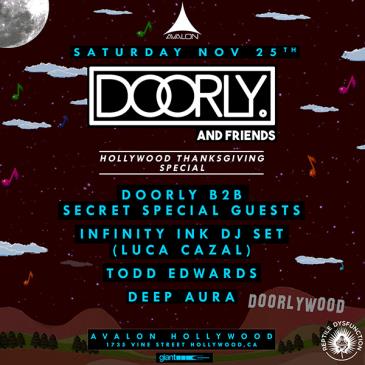