‘Stumpwork,’ the follow-up to 2021’s ‘New Long Leg’ will be released on 21 October 2022. The South London-based group’s first studio album, recorded in just two weeks with producer John Parish at the iconic Rockfield Studios, became a huge critical and commercial success reaching #4 in the UK Album Charts and featuring in best-of-2021 polls across the board. Buoyed by its success, Nick Buxton (drums), Tom Dowse (guitar), Lewis Maynard (bass) and Florence Shaw (vocals) returned to rural Wales in late 2021, partnering once more with Parish and engineer Joe Jones. Working from a position of trust in the same studio and with the same team, imposter syndrome and anxiety was replaced by a fresh freedom and openness to explore beyond an already rangy sonic palette, a newfound confidence in their creative vision. A longer period in the studio afforded the time to experiment, improvise, play, sharpen their table tennis skills.

‘Stumpwork’ was inspired by a plethora of events, concepts and political debacles, be they represented in the icy mess of ambient elements reflecting a certain existential despair, or the surprising warmth in celebrating the lives of loved ones lost through the previous year. Surrealist lyrics are as ever at the forefront – but there is a sensitivity now to the themes of family, money, politics, self-deprecation and sensuality. Furious alt-rock anthems combine across the record with jangle pop and ambient noise, demonstrating the wealth of influences the band feed off and their deep musicality. With the pressure of their debut album behind them, Dry Cleaning have crafted an ambitious and deeply rewarding new work that marks them out as one of the most intelligent and exciting acts to come out of the UK.

The album and single artwork were conceived and created by multidisciplinary artists Rottingdean Bazaar and photographer Annie Collinge. James Theseus Buck and Luke Brooks of Rottingdean Bazaar first worked with Dry Cleaning directing the official video for “Scratchcard Lanyard” and as their creative partnership with the band continues to flourish, they have fashioned a brilliantly unique visual identity for Stumpwork.

‘Stumpwork’ will be released on 21 October digitally and on CD, cassette, standard white vinyl and limited-edition black vinyl.

In 2013, 18 year old musician/songwriter Hannah D’Amato fled her Southern California suburban home. Disillusioned by the ubiquitous garage and psych rock casualties that polluted her local music scene and a healthy teenage desire to flee the nest, D’Amato set her sights on New York City. After several months of just scraping by and spending most of her time down in her Brooklyn basement practice space, D’Amato applied to the Berklee School of Music in Boston. In the middle of her audition, a member of the all white male panel silently approached and turned the volume down on her guitar amplifier. D’Amato left the audition and vowed to never return to the campus again.

Weeks later, she declined her acceptance into Berklee and doubled down on her commitment to forming her own group. Working as a nanny, D’Amato soaked in everything New York had to offer, playing in bands, developing a session side hustle, and forming the first incarnation of Fake Fruit. Rambling on to Vancouver B.C. in 2017 she found herself immersed in a fevered state of hypergraphia, writing several songs a day. The second iteration of Fake Fruit was born, now a trio, the Vancouver lineup was instrumental in helping to build the framework around her songs. After dozens of shows and some false starts at making a record, D’Amato, seemingly adverse to any sense of comfort, found herself again pining for change.

After moving to the Bay Area, she found herself at a spaghetti party (don’t ask) where she struck up a conversation with guitarist Alex Post, an Arthur Russel obsessive who made elaborate ethereal guitar instrumentals. A few weeks later, a chance encounter upon arrival at a New Year’s Eve party led drummer Miles MacDiarmid to open the door for D’Amato. Remembering the description she had been given of him when asking around about drummers (very tall, with a dangly earring and dark brown, Ian McCulloch-esque hair) she greeted him laughing “I know this is weird to say, but I think you’re supposed to be in my band”. The three hit it off immediately and became the third and current incarnation of Fake Fruit. Supported by a revolving cast of bass players akin to Spinal Tap drummers, Martin Miller contributed bass duties to the record, Trey Flannigan of Pardoner joined in from time to time as well as Dylan Allard of Freak No Hitter.

Against all odds, Fake Fruit’s self-titled debut was released 3/5/2021, on Sonny Smith’s Rocks in Your Head Records. Despite the global pandemic’s impact on live music, Fake Fruit have still managed to turn heads, earning accolades from the likes of Bandcamp, Brooklyn Vegan, Post-Trash, and more. 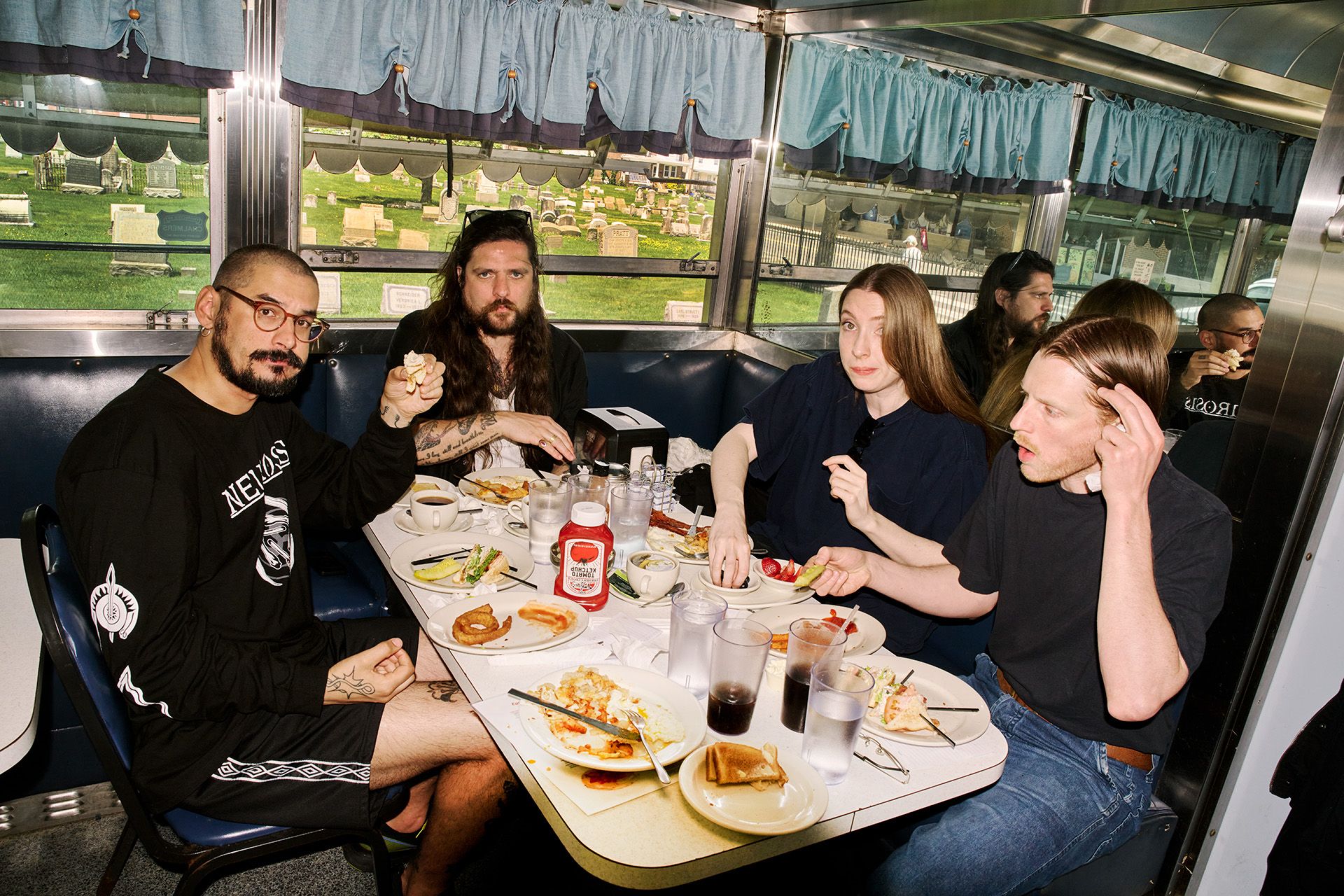