And More Friends to Be Announced!

As a teen, Duane Betts cut his teeth sitting-in regularly with Rock and Roll Hall of Fame inductees, The Allman Brothers Band.  A Sarasota, Florida native, Betts relocated to Southern California and led Malibu rock outfits such as Backbone69 and Whitestarr, then ascended to a near-decade stint playing guitar alongside his father, Dickey Betts, in his group, Great Southern. Whether as a touring guitarist for folk-rockers Dawes or sharing the stage with luminaries from Jack Johnson and G. Love to Kid Rock and Phil Lesh, Betts became a consummate musician. He continued to hone his craft in notable collaborations, including a brief, but celebrated 2017 stint with Jamtown- a supergroup featuring Love, Donovan Frankenreiter, and Cisco Adler.

In 2018, Betts’ own impassioned, six-string stories portraying a life and a history steeped in blues, rock and country music tradition inspired the release of his first solo record. With venerable guitar, timeworn vocals and enlightened, seasoned songwriting on a six-pack of instant favorites, Betts delivered five of his own freshly-drawn rock-and-roll portraits brilliantly colored in country and blues, plus a special homage to his Rock-and-Roll Hall of Fame dad. Enlisting the guiding pen of respected songsmith Stoll Vaughan and veterans Steve Cropper (Booker T. & the M.G.’s) and Marc Ford (Black Crowes) for a production hand on sessions in Nashville and Los Angeles, Betts issued his long-awaited solo debut, Sketches of American Music, in April of 2018.

In support, Betts released two videos for the EP’s singles- “Taking Time” and “Downtown Runaround- and undertook a world tour with the Devon Allman Project, fronted by the son of the late Gregg Allman. Betts also reunited with dad Dickey and his Band for a round of summer 2018 tour dates.

At year’s end Betts announced the formation of The Allman Betts Band, officially uniting with Devon Allman, and with Berry D. Oakley, son of the late Allman Brothers Band founding bassist Berry Oakley. The group recorded tracks at Muscle Shoals Sound Studio in November for its debut album, Down to the River, to be released in June of 2019. A world tour commenced in March of 2019 in New York City.

Duane Betts picked up a lot along the way. With every note and every word, he’s showing what he’s learned, while holding with the utmost respect what’s been passed to him.

“There are traits that are inherent. It’s in your sense of melody or with your phrasing. I think some of that stuff comes from hearing it a lot and from your instinct,” says Betts. “I have my own identity, too, and that’s my identity, for sure. I don’t think you could really get around that history if it’s there. I’m honored and I’m grateful to be a part of that legacy.” 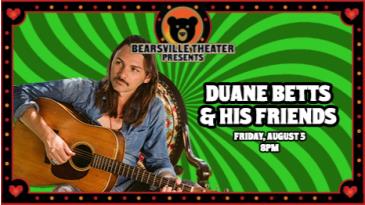