SOLD OUT- THANK YOU!

Gather your loved ones, Together is here. Duster’s fourth album is a 13-song exploration of comfortable, interplanetary goth. A sonic vaseline of submerged guitars, solder-burned synths, and over-driven rhythm tracks. “I know people say, ‘Oh Duster music so sad, we’ve even said it ourselves before,” Clay Parton said. “But it’s a lot more like absurdism than nihilism.”

After releasing last spring’s critically acclaimed ‘Crossing Over’ EP, Bay Area trio Sour Widows return with “Witness”, a sprawling track that cycles the listener through shades of grief. The song’s peaks and valleys have a new shine, thanks to collaboration with Oakland-based producer Maryam Qudus (Toro y Moi, SASAMI, Spacemoth).

The intuitive and empathetic writing process behind “Witness” is representative of the band’s creative approach for their forthcoming debut album, which they are currently writing and recording. Of the song’s origins, Susanna Thomson writes:

“This is the first song we finished since I lost my mom in June 2021. When we started playing together again last fall after being on hiatus for several months because of my mom’s illness, I was feeling easily overwhelmed by most things, and playing and writing were very difficult. Returning to this existing instrumental we had written together before everything in my life changed felt comforting and supportive. Monumental loss creates a very clear divide between those in your life who can understand the depth of that kind of pain and those who can’t. “Witness” speaks to that experience.”
In addition to finalizing material for their full length record, the band has kept busy in 2022 with debuts at SXSW and Treefort, and tours with SPELLING, Pile and Babehoven across the west coast. The trio will also be touring the east coast for the first time this fall.

Sour Widows was formed in 2017 by Maia Sinaiko, Susanna Thomson and Max Edelman. All three had been close since meeting in various phases of childhood, and when they found themselves living in the same area, making music together came naturally. Maia and Susanna initially performed as a guitar/vocal duo, with Max joining on as drummer in 2018 to add a rhythmic element that completed the band, grounding the songs and opening them to a new range of possibilities. With a musical connection that was an extension of their longtime friendship, the band began fine-tuning a sound that swung from gently glowing harmonizing to energetic bursts of feedback-laced catharsis.

With their ‘Crossing Over’ EP—described by Pitchfork as “wielding raw vulnerability like a superpower”—Sour Widows discovered a new intensity by turning inward. The record dialed back some of the volume that drove their self-titled 2020 debut to make space for themes of self-reflection and painful change that cut through with sharpened clarity. The luminous vocal harmonies, complex guitar interplay, and understated drumming that have been at the core of the band's sound remained foundational; but these four songs reached deeper, all the more stirring in their subtlety.
The unique form of the EP documented the band discovering a voice which derives its translucent power from restraint and intentionality. ‘Crossing Over’ represented a new phase of Sour Widows’ artistry, pointing to further growth with their soon-to-follow full length debut. 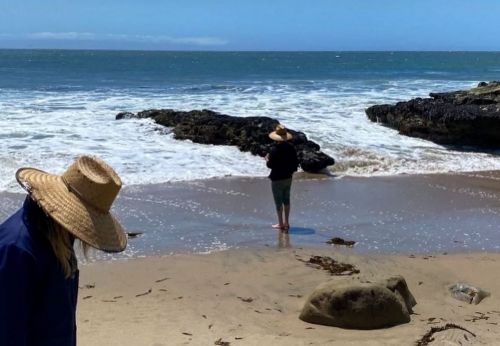