Processing...
Tickets
Tickets are available at the door for $15

Multi-instrumentalist, singer and songwriter, Elise Carver is a force to be reckoned with.  Elise grew up in Tucson, Arizona as one fourth of a musical family.  As her mother was a classical pianist turned dinner theater entertainer, Elise's first job consisted of playing drums in the pit band for rambunctious, touristy, welcome-to-Arizona style dinner theater musicals.  Elise then moved to Boston to study classical voice at Boston University, earning her Bachelor of Music degree in vocal performance.  Trading in her operatic voice for something a little more edgy, Elise moved to LA to pursue a career in music.  Over the years, Elise has performed all sorts of genres in all manners of ensembles, including: singing soprano with the renowned Tanglewood Festival Chorus for several seasons, singing with the Boston Pops, playing violin in an Andean music group, performing mariachi music in her hometown of Tucson, and performing with an LA rock and blues cover band known as the Saboteurs.  Elise released a self-titled EP in 2009 and is currently working on the tracks for her next album.

The Eagle Rock Gospel Singers began as a collective of friends getting together in the summer of 2010. A choir of up to 15 revived the old Gospel spirit with songs like “I Shall Not Be Moved”, “12 Gates”, and “In My Time of Dying”.  Slowly they evolved into a band of 6, committed to embracing the richness found in early 20th century recordings. Influenced by past Gospel musicians such as The Dixie Hummingbirds, Washington Phillips and Sister Rosetta Tharpe as well as current bands like The Black Keys, Wilco, and Calexico, the band creates a unique style drawing from rhythm and blues, alt-country, indie rock and folk.

Their sophomore effort, "No Glory" featured a return to the Gospel roots that the group was founded on. The songs range from all out rockers to smooth a cappella numbers. The band's thumping rhythm section and choir singing places them in a unique position in which they constantly blend Americana music genres (blues, folk, country, and soul). They have just finished their third full length album, "I Will Rise."

Jillian Ann is a Boston native singer-songwriter, performer, and recent graduate of the prestigious Berklee College of Music. She has created a catalog of music that transcends a variety of genres, and has been compared to the likes of 70s singer/songwriter icons Carly Simon and Kate Bush. She has an ethereal tone to her voice that is unmistakable. Her debut EP, "Truly, Madly, Deeply" , showcases her raw and pure talent, with the essence of her greatest influences, and the lyrics in each song tell compelling stories that will leave you breathless and longing for more. Jillian steps into the Indie Pop genre on her latest EP release, “I Hope You’re Listening Now”, a concept EP depicting the adversity and struggles of going through life during pandemic years.

Camille Rose is a singer, songwriter, model, and actress. Growing up in the San Francisco Bay Area, Camille worked alongside recognized vocal coach Lynn Asher and multi-platinum Grammy and Emmy award winning producer, Narada Michael Walden from the young age of 10. Her debut song, Over It, was produced at Tarpan Studios alongside Narada and inspired Camille to release more music independently. Now based in Los Angeles, Camille is continuing to record more singles and perform R&B alt pop locally with a band from Whittier College.
https://www.instagram.com/the.camillerose/
https://vm.tiktok.com/TTPd6MQF8s/
https://youtube.com/channel/UCtLQ5KHN0pDdZdRmcbdQtmQ
https://youtu.be/ee3Wo3hI9b4
https://open.spotify.com/track/789dTq5ts3lGlEt7ZZKfeD

From an alternate timeline where the "M" in MTV still means "music" and playlists are still called mixtapes comes Super OK, a Los Angeles four-piece. Reveling in being told they kinda sound like Foo Fighters and Muse, Super OK graciously welcomes any and all comparisons to their influences, including Arctic Monkeys, Stone Temple Pilots, Nirvana, and anything Chris Cornell touched. Benjamin Buday and Davey Henry share vocals and guitars, Drew Stutz mans the drums, and Kat Cannon blasts the bass. 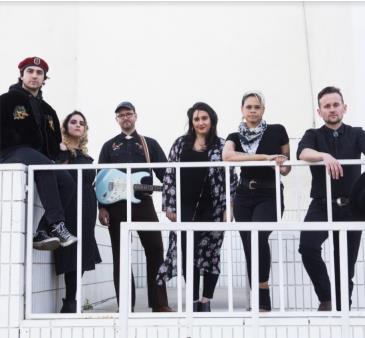