While he may not be a household name at present, Evan Barber is no stranger to the Americana/roots music scene in the south. The Albany, Georgia native has been writing, recording, and touring across his native territory for the better part of the past decade. He’s cut his teeth sharing the stage with the likes of Chris Stapleton, Blackberry Smoke, Jason Isbell, and the Drive-by Truckers — just to name a few. His songs are sketches of the American South; honest-to-goodness stories lifted from the prairies situated below the heart of Appalachia.

Barber’s latest offering Until The Thunder plays out like a daydream on the front porch swing after an evening spent under the stars, reminiscing about what has passed and pondering what is yet to come. Guitars awash in reverb blend with Barber’s warm, crooning vocals to offer a unique listening experience, something that wouldn’t be unfairly labeled as country/folk-tinged Explosions in the Sky at times. It’s southern comfort amidst southern struggle; finding a warmth in the cold.

Speaking of southern, Barber points to the “duality of the Southern Thing” — Patterson Hood’s apt moniker for reckoning with the region’s dark past while simultaneously celebrating the area’s progress and inherent pride — as an inspiration for his writing.

He comes by it honestly; as a lifelong Georgia resident, he’s seen and fully lived both the beauty and the shame associated with the Southern Thing. Until The Thunder draws heavily from his upbringing as well as road-worn experiences from time spent touring with his band, the Dead Gamblers. These songs are truly from the heart; his heart being that of a lifelong Southerner.

Until The Thunder marks Barber’s first proper “solo” release, as his previous offerings Bronze (2014) and Evan Barber and the Dead Gamblers (2010) were both written and recorded specifically as Dead Gambler albums. Prior to now, the songs were honed on the road for months prior to being recorded, something that wasn’t possible after March 2020.

“Those songs were always written with the band in mind and were road tested therefore evolved into what they were so 99% of the time that’s exactly what came through in the studio,” Barber notes. “Whereas the songs for the new record are from a way more personal frame of mind…these songs represent an almost entirely new style of songwriting for me, which allows the end result to be completely honest and meaningful in ways I feel like I’ve fallen short of expressing in the past. I felt that I finally had the freedom to write and express exactly what was on my mind.”

Taking the “live in a room” approach to recording also lent itself to a vibe not necessarily found on Barber’s previous efforts. The tracks were cut swiftly, with any slight imperfections allowed to remain — focusing more on capturing the energy of the moment versus polishing and re-cutting over and over again. This isn’t to say the record lacks polish, but rather that it presents a warmth not found in the litany of over-produced releases constantly flooding the airwaves.

Until The Thunder stands as the culmination of Barber’s decade-plus career of full-time songwriting and touring, and the future remains bright for this lifelong Georgian as he looks to share his story with the world.

Rachel Forehand, an upcoming singer/songwriter from Macon, Ga, began playing live shows in the college town of Statesboro, Ga just 2 ½ years ago during her Sophomore year of College. Always having a strong musical background, it wasn’t until later in life when she began playing music. While in college studying Fine Arts, she began composing multiple songs and after graduation, recorded the songs at Gift Horse Records in Athens, Ga and is planning on releasing her first EP titled “Six Strings & Day Dreams” this Summer.
Six Strings & Day Dreams is a six song EP, featuring three singles, the first being released on April 15th titled “Vapor in the Mist”. This album resonates a distinct sound between Southern Rock and Country Alternative that holds soulful lyrical authenticity and touches a variety of genres which sets it apart from the rest. The album is made up of songs with true events that occurred and past memories made in life. Rachel’s goal of the album is to inspire others to live in the moment and enjoy the people, places, and things that make life special.
Not only does Rachel play solo shows but she is also involved in a new band "Black Jacket Bandolier" that is based out of Macon that plays Rock'N'Roll, Blues, Southern Rock, and original music off of her upcoming album. Visit www.rachelforehand.com to see show dates as she plays consistently in the Southern Market. 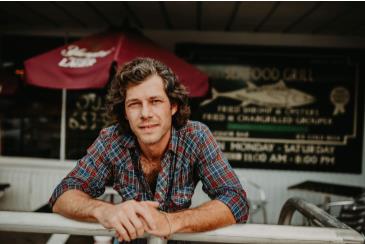