“Try it again / try it another way,” sings Jonathan Higgs on Jennifer, one of the beautiful hi-spec pop songs that define Raw Data Feel, Everything Everything’s sixth album. Consoling yet dynamic, that line could stand as the mission statement for fourteen new songs forged from the desire to experiment, the sound of a band entering a new phase of discovery after more than a decade of restless creativity.

Raw Data Feel – that title, says bassist Jeremy Pritchard, reflects an attempt to make it “straight from the heart, the id rather than the ego” -  was an essential leap forward for the band. Having finished their fifth album RE-ANIMATOR in 2020, just as the pandemic closed in, there was an inescapable anti-climax when it became clear they couldn’t have the closeness and closure that comes with playing an album’s songs live. They needed, says Pritchard, something to push them on through that dispiriting lull; Raw Data Feel was the “fulcrum”, providing the drive to find new ways of working, new ways of being Everything Everything. Despite the straightened circumstances of the past two years, it’s a record that finds new horizons to chase, illuminating previously hidden entry points for their ongoing interrogation of the modern human condition in all its pixelated, shape-shifting glory.

They had always wanted to produce a record themselves and now was the time, with guitarist Alex Robertshaw taking the lead. With modular synth compositions the bedrock of the record, during scarce, precious live dates with Foals in the summer of 2021, the band would gather in the back of their bus, “chipping away at arrangements” on Robertshaw’s laptop, working with rapid fluidity. This time, there would be no “disappearing for five weeks and going mad on a farm,” as drummer Michael Spearman laughs – instead, they headed to the studio five minutes away from where they rehearse in Manchester, working with a concentration, discipline and – even to them – startling ease. “I’d like to work like this again,” says Higgs. “Hit the ground running. I don’t think poring over something actually improves it.”

At one point, Higgs believed that these songs would form a concept album – the record’s frequent references to a character called Kevin are part of that vestigial tale – but it became clear songs this directly affecting didn’t need that framing device. Each one of these tracks tells its own perfect story, whether the violently looped disassociation of Bad Friday, influenced by UK garage and a love of Tion Wayne and Russ Million’s Body, or the ravey Pet Shop Boys romance of I Want A Love Like This.  “We’re trying to inject songs into experiments and that’s kind of where the interesting stuff happens,” says Robertshaw

There were other twists. The singer – like most of the world given recent events – needed to take some time off from the contents of his head and turned to AI for assistance, actively positioning the programme as a kind of digital George Martin, “a fifth member of the band -  a collaborator in terms of lyrics, another person I can bounce off.”

Into the computer went Beowulf, 400000 4Chan comments, the teachings of Confucius and LinkedIn’s terms and conditions in their entirety – “the extremes of ancient wisdom, literate beauty  and modern horror,” laughs Pritchard. Out came the linguistic corruptions and neologisms that pepper the album, an update of Bowie/Burroughs cut-ups or Eno’s Oblique Strategies.  “I wanted to experiment with something I couldn’t control, “ says Higgs, “although I did end up  controlling it quite a lot obviously by only feeding it the things I wanted and only choosing the things I thought were good from what it said. It was a collaboration, really, it wasn’t just total chaos. I just wanted something that would come out of nowhere.”

“It’s the sound of the record as well,” Higgs continues, “a lot of technology meeting organic sounds. I think there is a certain type of interaction between Alex’s technology and the human that is using it which is quite unique.”

Since their 2010 debut Man Alive, Everything Everything have captured the human face reflected in the doom-scrolling screen, sensitive to both the internal chatter and external chaos. Raw Data Feel isn’t just about raging against the machine or the dying of the light,– it’s a record that consciously tries to take horror and trauma and reshape it into a something positive. There are moments that echo 2015’s geopolitical shocker Get To Heaven or the pure fury of Big Game, from 2017’s Brexit-stained, Trump-scarred A Fever Dream. Hex, for example, “a balls-out wild chant, a curse,” says Higgs. “I tend to want to write one of those songs at least once a record, have a big load of insults. Get everything out that I want to get out. It’s a song about being in a cult, giving yourself up, destroying everything. It’s a bit like Get To Heaven –it’s like a message to that energy that era, to the guy I was when I made that, the characters on that album.”

Yet there is also a profound warmth and humanity to Raw Data Feel, from the delicate yearning of Kevin’s Car to the depths of Leviathan, a song full of grief and loss. Teletype – the album’s lodestar track, the moment Raw Data Feel’s direction became clear – is a glitchy shudder through a quiet green-shoots reawakening – “Where is my sense of joy? / It’s creeping back in.” Jennifer, meanwhile, hits a variety of musical pleasure centres: California rock, Paisley Underground, Nordic pop  a heartfelt statement of defiance in the face of despair. “It’s like a holiday away from our own band,” says Spearman, “like being in Fleetwood Mac for a minute.” There was also a chance to have a turn at being Kraftwerk on My Computer, its impeccable chorus offering a gloriously jaded version of modish mindfulness techniques: “you’re in love with the future / I don’t know why.”  Software Greatman, wit a title that was pure AI neologism, ends with Higgs atomising into static and beats, back into the circuitry, back into the grid.

Even in dark times, Raw Data Feel is a record that uses its unfailing creative impulses and instincts to reactivate the idea of spontaneity, exploration - even pure untramelled fun.  “I’m really not ashamed to say I think it’s amazing,” laughs Higgs.

“The humans are getting information back, deciding what has feeling and what doesn’t,” says Robertshaw. With Raw Data Feel, the humans are doing a great job. Trying it again, trying it another way, Everything Everything are back out there again, remodelling the old worlds, finding new ones to explore. 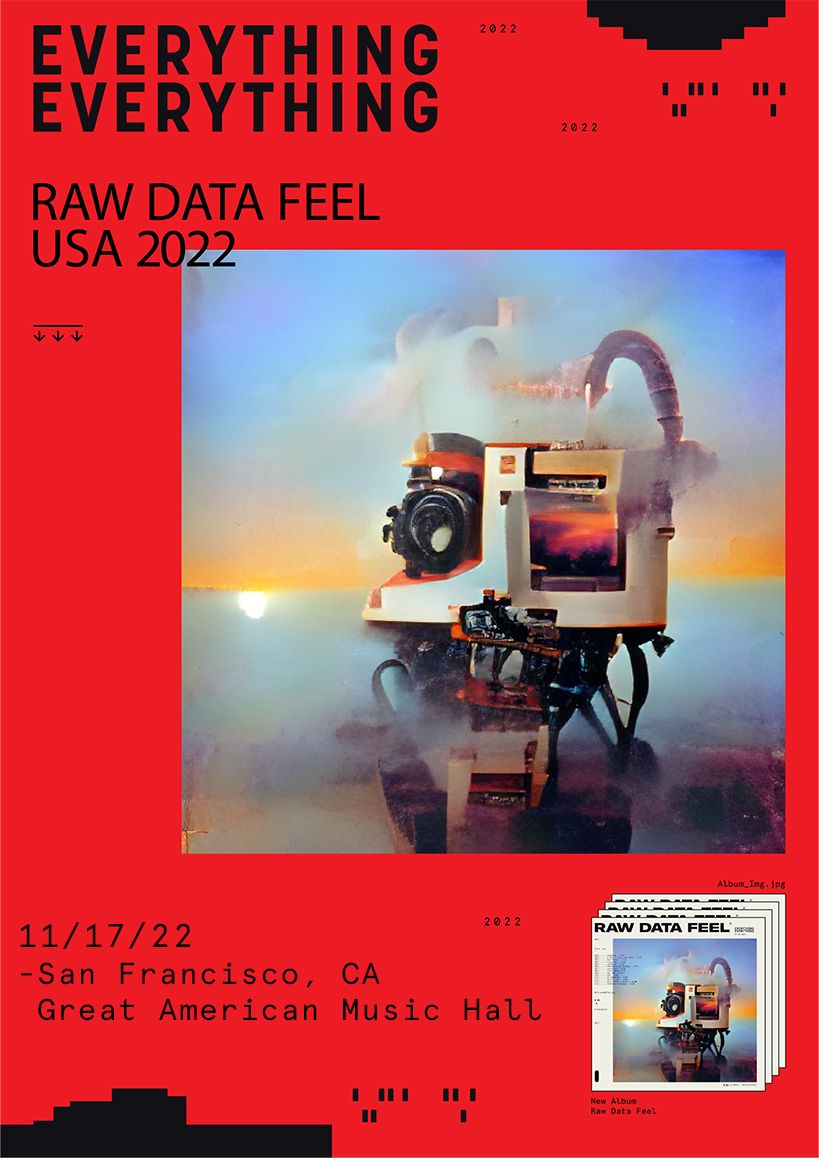