FRIENDSHIP - Friendship’s Merge debut, Love the Stranger, moves like a country record skipping in just the right spot, leaving its fellow travelers longing for a place they’ve only visited in their dreams. Guitarist Peter Gill, drummer Michael Cormier-O’Leary, bassist Jon Samuels, and hawkeyed balladeer Dan Wriggins map out the group’s particular, breathtaking landscape and invite the listener to share in its glory.

Love the Stranger’s invitation is all the more wondrous because its characters have clearly been hurt before. “I need solitude and I also need you,” Wriggins reckons in “Ugly Little Victory.” Wide awake, vulnerable, and gimmickless, Friendship won’t hesitate to confide in us, or even ask for help when the moment calls, like on the lyrical centerpiece of “Alive Twice”:

Under your eyeball spell, I was losing myself/ Not in the good way you used to talk about/ I remember a day, Cedar Park Cafe/ I was in a bad place and you set me straight/ With your on-the-nose advice

Between instrumental pit stops at “Kum & Go” and “Quickchek,” local references in Love the Stranger create a catalog of human perception, presented as roadside attractions. From grape jelly residue (“Ramekin”) to the site of a demolished cathedral (“St. Bonaventure”) to King of the Hill quotations (“Smooth Pursuit”), the record’s images craft a symbolic language of high and low Americana, both evocative and consistently accessible. Spending time with Love the Stranger creates a community—one in which the window between the listener and the music-maker shatters in full, until all that remains are the fragments you decide to pick up together.

Like its sprawling lyrical references, Love the Stranger’s production is both familiar and capacious enough for pedal steel, synth strings, airy folk guitar field recordings, and MIDI pad exploration to work in vital harmony. Influenced by Friendship’s punk and indie peers as much as road-star forebears like Lucinda Williams and Lambchop, Wriggins says of the recording sessions: “We all got to stretch out, chase our personal musical fixations, and build on each others’ work. Bradford Krieger, our engineer at Big Nice Studio, has a mind-blowing creative energy and hundreds (thousands?) of instruments.” He recalls further: “I wanted the album to sound like Emmylou Harris and the Hot Band in the ’70s. Pete wanted it to sound like a semi full of spent fuel rods, barreling towards a runaway truck ramp. Jon kept reminding us that the studio is an instrument, and Michael wanted it to sound like the breakdown two-and-a-half minutes into Shuggie Otis’ ‘Strawberry Letter 23.’”

Some breakdowns, however, are irreparable. Wriggins, a manual laborer and poet, calls “Hank” “a song about when you go to fix something that’s broken and realize the tools you’re supposed to fix it with are also broken.” Form follows function on the mesmerizing outro of the single, which buzzes with the sound of a shoddy Craigslist guitar from Woonsocket, RI (incidentally, the home of the Museum of Work & Culture) getting chainsawed in two.

Friendship is probably already your favorite band’s favorite band, a long-revered IYKYK of DIY with a devoted cult following from Wawa to In-N-Out. With Love the Stranger, the Friendship universe only continues to expand and grow more open-hearted, more inviting, with every passing note. It’s a record that locates the listener exactly where the listener is, and wherever that may be, makes a friend out of them, too. All said and done, the age-old maxim of “Mr. Chill” holds true: “You be real with me and I’ll be real with you.”

With the help of Spencer Radcliffe and Tina Scarpello it quickly became something more fully-formed. By spring of 2019 they’d recorded their debut My Heart Is An Open Field.

They recorded the album in Radcliffe’s home in just a couple months. Having played in the band, he understood the tenderness it needed to maintain. Half of the songs were written the week before. The album retains that spontaneity and rawness.

Shoman says “It was such a fun way to record without second guessing myself and to let things be.”

“Earthquake” kicks off the album, a peel of quavering, high-noon guitar cutting through, a flash of lightning illuminating the wide open space the record inhabits. The jarring opening subsides into a gentle shuffle— a cradle for songwriter Shoman’s wild and pure voice. The song is about that ache when you recognize a feeling or a person starting to fade. As you desperately grasp to keep it close.

“Serpent” was one of the first songs Shoman wrote. It imagines what it would feel like to get bitten by a snake and ties that to how it feels to lie to yourself and the dizzying pain it can cause, the guitar solo repeatedly sinking its teeth in. Shoman says about the song, “It’s not until you finally speak your truth and become vulnerable that you can have relief and resolution, even if that means the death of something.”

The band name comes from Shoman’s grandmother’s name Hortencia, who she feels is her kindred spirit. Her memories of hearing her sing while cooking or cleaning influenced some of the same qualities in her own voice, a sweet and shaky vibrato she could feel moving through her. The end of Side A of the record is a voicemail from her grandmother reminding Jess of how much she loves her, “Don’t get tired of my calls, love.”

My Heart Is An Open Field is about the wavering feeling of laying everything out in the open where sometimes dormant memories bubble up to show their faces. It’s about picking at your own knots and scabs and eventually joining yourself in an honest and present form. This album is filled with nuance– breaths of saxophone and flute, and touches of cello, piano, and pedal steel are hung on the sturdy folk songs of Shoman, whose vibrato and range cuts through these dreams like a loved one’s voice.

The current lineup of Tenci includes Chicago musicians she met playing some of her earliest shows. Curt Oren plays saxophone, flute, and guitar. Isabel Reidy (of Izzy True) plays bss, and Joseph Farago (of Joey Nebulous) plays drums. They’ve added a depth and playfulness to the songs that have made them even bigger and full of life. 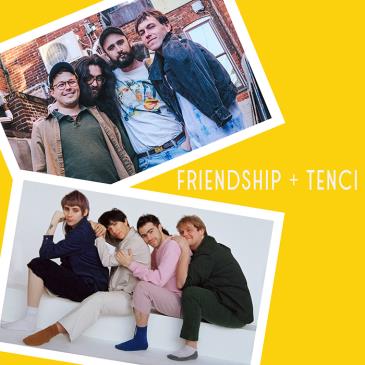