DATE: Nov 19, 2021TITLE: FUX: Official Afterparty Night 2ARTISTS: Fux (headlinerhttps://www.facebook.com/doyoufux/
Mighty Good Timeshttps://www.facebook.com/themightygoodtimes
$12 ADV$15 DOS10:30 Doors18+
Official Umphree's McGee Afterparty with FUX!
Fux (Fyooks) is like an Electric Storm, combining multiple elements and sounds that flow throughout the space and provide a performance you just can’t stop staring into. Not only bringing the Passion back to Rock-n-Roll but also touching multiple genres including Psychedelic rock, Heavy rock, Funk, Jamtronic, Jazz, and Beatles pop like lyrical phrases. The name derives from composer Johann Joseph Fux, who helped modernize Western Music and is the author of Gradus ad Parnassum, a treatise on counterpoint. Blending their love for Umphrey’s McGee, Phish, Al Di Meola, Mahavishnu Orchestra, Steely Dan and many classic rock bands, Sultan set out to find the final puzzle pieces to this mystical musical monster, which lead to the discovery of Dustin Fennell, Dylan Porper, and Eric Johnson. Thus in an erotic crossfire hurricane Fux was born.

Fux decided it was time to take their knowledge and mend it with their soul to work towards getting the masses dancing, laid, and spreading Love. After receiving knowledge from idols Jacob Alan Cinninger, Brendan Bayliss (Umphrey’s McGee) and Gabriel Marin (Consider the Source) they were finally ready to show the world what was brewing in their mind to create music that makes sense.

Fux combines their humorous and laid back personalities on and off stage to help spread cheerfulness and positivity to the world. Don’t let their contagious attitudes fool you, these boys show up to play. With the machine like transcendental rhythmic varieties from Eric , wondrous varieties of sounds for the imagination from Dylan, thunderous bass love bombs from Dustin and sporadic psychedelic ignition from Sultan, Fux will keep you dancing all night long.

“I wish i named my band something good.”
Brendan Bayliss, Umphrey’s McGee 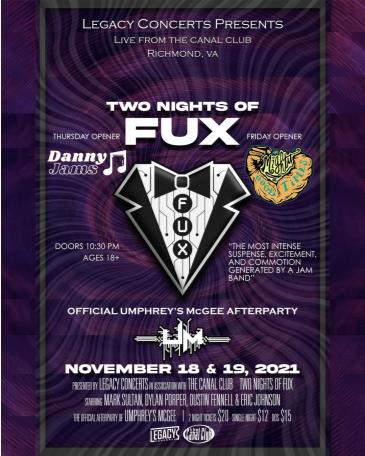