John Gooch, better known by his multiple stage names - the most well-known being Feed Me, is an English DJ and producer who has been releasing music for nearly a decade. He began releasing dubstep/ electro-house productions as Feed Me in 2008, the first being his single, “The Spell,” which was released on the the Mau5Ttrap label. He has collaborated with several notable artists, such as Kill the Noise, and has produced remixes for top artists of all genres, like Timbaland, Nero and Depeche Mode. This summer, Feed Me released his most recent album, “Feed Me’s Family Reunion,” which reached the No. 7 spot on the Billboard Top Dance/ Electronic Albums chart.

Doors open at 9:00 PM! General Admission, Standing. Livewire is an “open floor” venue to allow artists to connect with their audiences during performance.

If you are interested in Bottle Service in a VIP Booth, please contact Tyler at TylerP@livewireaz.com or 480-849-5010

Under 18 permitted with the purchase of a ticket AND must be accompanied by a paid adult.

No service fees for tickets purchased with cash at the Livewire Box Office. Facility fee is charged on all tickets. Prices are subject to change without notice.

Advanced purchase highly recommended as many shows do sell out. 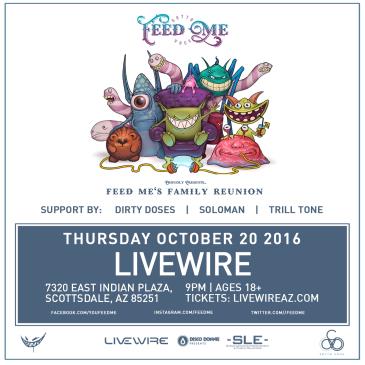