** Proof of vaccination, with final dose at least 14 days prior to show date, will be required to enter the venue.**

As of September 20, 2021, all patrons will be required to wear masks while attending an event unless actively enjoying a beverage. Additionally, proof of full COVID-19 vaccination or a negative COVID-19 test result within 48 hours will also be required. At-home tests can only be accepted with results given via an app (which includes your information). The test result will need to include your name and date of birth, and also have a time stamp so we can determine when the test was taken. It will be compared to your photo ID at the door.

If you are uncomfortable with these guidelines, have already purchased a ticket, and would like a refund you may contact the Rialto box office at box.office@rialtotheatre.com.

Isolation is nothing new for Fenne Lily – in fact, she’s written an album of songs all about it. “It’s kind of like writing a letter, and leaving it in a book that you know you’ll get out when you’re sad – like a message to yourself in the future,” she says, referring to BREACH, her Dead Oceans debut she wrote during a period of self-enforced isolation pre-COVID. It’s an expansive, diaristic, frequently sardonic record that deals with the mess and the catharsis of entering your 20s and finding peace while being alone. “I think this record is proof that I can be emotionally stable, even if right now I feel a little bit up and down,” says Fenne. “There’s the ability to find clarity in that. It’s sobering, weirdly.”

Fenne was born in London and moved to Dorset as a toddler, where she grew up in the picturesque English countryside. She was a “free range kid,” as she calls it, after her parents took her out of school for a period at the age of seven. Over the following year, they taught her while the family travelled Europe in a live-in bus. Even after she returned to traditional school at 9, her home education never ended, extending to music. Her mother gifted Fenne with her old record collection, through which she discovered her love for T-Rex and the Velvet Underground and Nico. Soon after she fell for the strange genius of PJ Harvey and came to worship Nick Drake, Joni Mitchell, and the richly crafted worlds of Feist, which inspired Fenne to pick up a guitar.

On Hold, a tender collection of expressive, open-hearted songs, was Fenne’s first foray into songwriting, written during her teenage years. Writing her own songs was initially a “therapy exercise” for Fenne, who is normally reserved when it comes to talking about her feelings. The album, self-released in 2018, organically found a large audience online, which grew after she opened for Lucy Dacus and Andy Shauf’s North American tours last spring. Surrounding its release, The Line of Best Fit deemed Fenne “a new and extraordinary voice capable of wringing profound and resonant moments out of loss.”

Where On Hold grappled with love and relationships, BREACH digs deeper into Fenne herself. “I tried to write about my inner life, as opposed to how people affect my life as a third party,” she explains. Written after a disjointed experience of touring Europe, and then spending a month alone in Berlin, the album deals largely with “feeling lonely. And trying to work out the difference between being alone and being lonely.” Although its subject matter is solitude, it sounds bigger and more intricate than anything Fenne previously released. She recorded with legendary producer Brian Deck at Chicago’s Narwhal Studios, with further work at Electrical Audio.

Lead single ‘Alapathy’ is the first taste of a newly upbeat and urgent streak to Fenne’s songwriting. Its insistent percussion mimics the anxious racing thoughts that Fenne deals with as an overthinker and chronicles how she “started smoking weed to switch off [her] brain.” The title is a made-up word that merges ‘apathy’ and ‘allopathic’ (as in Westernized medicine). “Western medicine generally treats the symptoms of an illness rather than the cause,” explains Fenne. For Fenne, taking medication to improve her mental health didn’t solve her problems because she felt like she was only treating the effects of her discomfort, not the reason for it.

Elsewhere, there are brighter songs on the album. Fenne wrote hazed-out lo-fi rock song ‘Solipsism’ after watching a documentary about the Stone Roses. She wanted to create “something that sounded cheerful, about something really not cheerful.” The song deals with the anxieties of a social media driven generation, “because everyone is sharing everything, and everyone’s comparing their lives to other people’s.” She sighs her age (“one and twentyyyyy… ohhh”) over the strident surge of guitar fuzz, as she sings about the pressure to have more fun in her 20s, and the solipsism that keeps her awake.

On slowly unfurling ‘Berlin’, which she describes as her defining moment of the record, Fenne has a hushed-yet-powerful energy. It was written during her time alone in Berlin after her third reading of Patti Smith’s Just Kids, and made a solo voyage to the popular nightclub Berghain. The experience was one of pushing her own boundaries, and the morning after, she woke up and wrote ‘Berlin’, a careful, beautiful declaration celebrating being comfortable being alone.

The songs that make up BREACH layer Fenne’s own experiences with what she’s learned from others. Initially, ‘Elliott’ was inspired by someone she met in Bristol who turned his back on the allure of being in a rock band to run a hardware shop. As the lyrics started to arrive, the song “became clearly about my dad’s childhood and solidified the record as something chronicling more than my own stories,” says Fenne. ‘Elliott’, with its gentle harmonies, is a peaceful moment that condenses many of the record’s themes: family, the relationship between our child and adult selves, and the decision to follow an isolated, untrodden path.

It’s that journey to find peace inside herself that underpins the whole of Fenne’s second album. Its title, BREACH, occurred to Fenne after deep conversations with her mum about her birth, during which she was breech, or upside down in the womb. The slippery double-sidedness of the word – which, spelled with an ‘A’, means to “break through” – drew her in. “That feels like what I was doing in this record; I was breaking through a wall that I built for myself, keeping myself safe, and dealing with the downside of feeling lonely and alone. I realized that I am comfortable in myself, and I don’t need to fixate on relationships to make myself feel like I have something to talk about. I felt like I broke through a mental barrier in that respect.” Even though it also carries implications of awkwardness, rebellion, and breakage, it’s a wide-reaching word, representing new beginnings and birth.

In addition to being an indie rocker on the rise in her own right, Illuminati Hotties lead singer Sarah Tudzin is an accomplished producer, mixer, and engineer who’s worked with the likes of Weyes Blood, Lady Gaga, and the cast of Hamilton. Her technical expertise gives her a firm grasp on the emotional and sonic arcs of Illuminati Hotties’s music, which is full of swift and dramatic shifts in tone, from acerbic and brash to soft and despondent.

The band’s self-described “tenderpunk” style is defined by the ebb and flow of dualities, and on Let Me Do One More, these contrasts are enthralling. Like their 2018 debut, Kiss Yr Frenemies, the album is dynamic and clever, with the constantly shifting array of production details underscoring Tudzin’s lyrics. “Knead,” for instance, matches the textures of lyrics about food crumbs and hands on thighs with gritty guitars and caustic, pinched vocals.

Compared to early Illuminati Hotties bangers such as “Pressed 2 Death,” though, the songs on Let Me Do One More are even more ambitious and prone to sudden and surprising changes of pace. The blistering “MMMOOOAAAAAYAYA” is especially bold, its skittering percussion and discordant electric guitars complementing Tudzin’s wild vocal modulations, which channel riot-grrrl energy in one moment and Kate Bush in the next. And all the while, Tudzin’s wordplay (“An ex-terrestrial, I used to be grounded”) and sense of humor (“The DNC is playing dirty/Text me, touch me, call me ‘daddy’”) attest to her wit and charisma.

Let Me Do One More’s emotional apex is the raw and revelatory ballad “The Sway.” Even as Tudzin sings about losing power to a partner who uses her (“Made sense to get your confidence polished with me”), her restraint behind the board for much of the song makes the slow build to its impassioned bridge all the more impactful. Between its slow-burn structure and gestural lyrics (“You’re leaning in/I’m leaning away”), the song avoids melodrama for a moment of tearful defiance that lives up to Illuminati Hotties’s tenderpunk ethos.

Let Me Do One More’s somber slowcore-influenced love songs are even more effective when they directly abut the rowdier garage-rock tracks, and the album’s sonic palette is as wide as its emotional fluctuations. As a whole, Let Me Do One More is more punk than its predecessor, and like Australian punk-rockers Amyl and the Sniffers, Tudzin weaves the personal with the political and—in a way that’s as clever as it is uncomfortable—economics with love.

Narratively, much of this album revolves around a relationship in limbo, with Tudzin singing to a lover who’s slipping out of reach. Big Thief’s Buck Meek gives this character a voice on the alt-country-meets-power-pop “u v v p” when he says, “I’ve been known to have too much tumbleweed in my blood to ever settle down.” On “Threatening Each Other re: Capitalism,” Tudzin’s absurd and up-to-date lyrics about lovers exchanging death threats give way to a marketing ploy as a metaphor for her misguided affection: “The corner store is selling spit/Bottled up for profit/I can’t believe I’m buying it/Isn’t that genius?”

This inner turmoil crystallizes on Let Me Do One More’s forlorn closing track, “Growth,” where, subdued almost to a whisper, Tudzin sings, “You’re so used to the ignorance of the apathetic.” Her partner isn’t just an individual falling out of love, but a symbol of a generalized disconnect, the romantic communication breakdown standing in for political polarization and inaction. “I guess being an adult is just being alone,” Tudzin concludes from behind a thin gauze of distortion. She ends the album by saying, fittingly, “Let me do one more,” presumably a request for another take recorded candidly in the booth. In the context of this heartrending breakup song, though, the album’s title reads as a prayer for another chance, a hope that sorrow and indifference can be overcome by love and the creation of art. 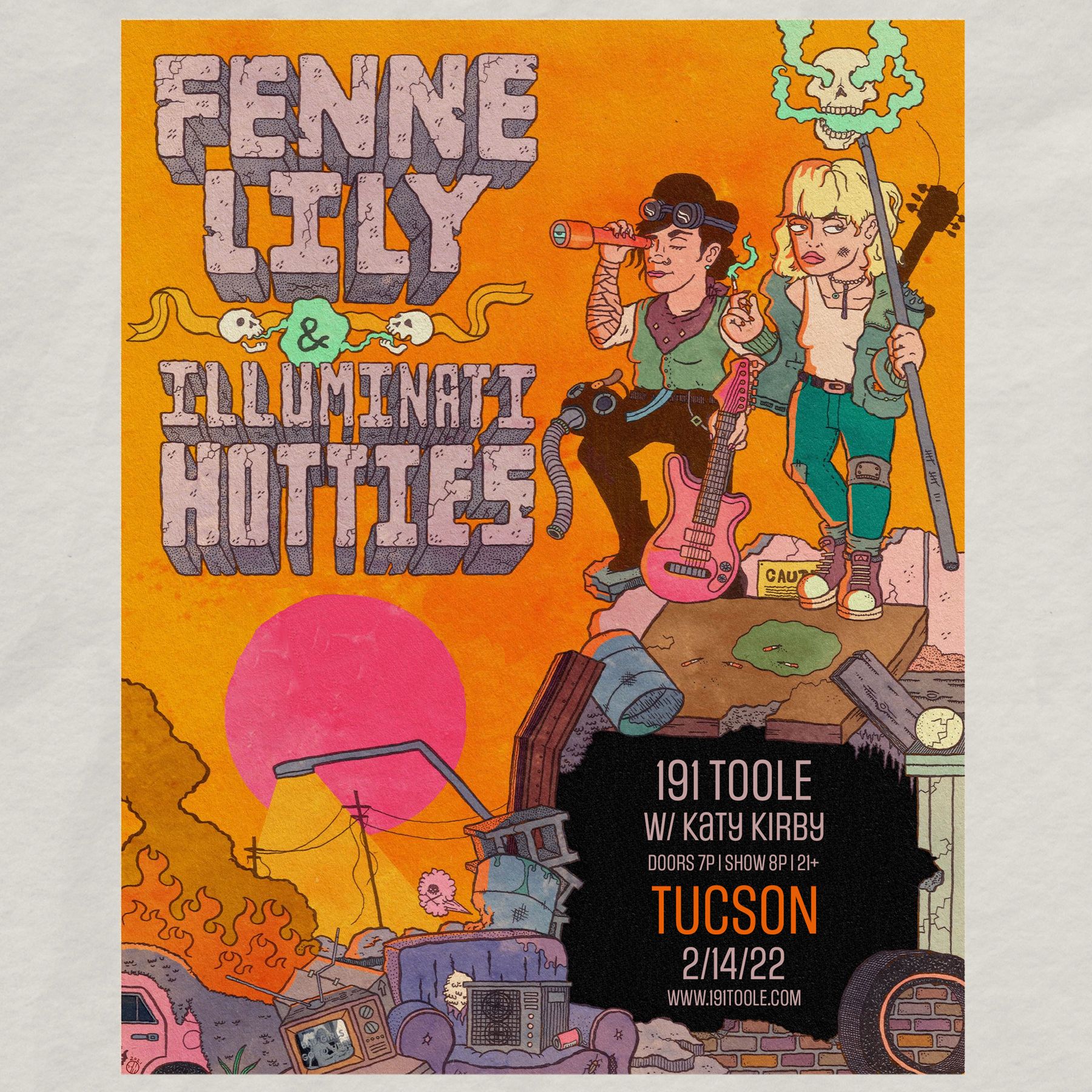