at Tom of Finland Foundation

Onward Lossless Follows (2017) [16m 52s – Directed by Michael Robinson]
Onward Lossless Follows takes a trip over desert landscapes to the great digital future unknown. Along the way, stock videos show women celebrating in front of their laptops, horses fly, and an unsettling meet-up burgeons into a relationship full of love and loss.

Sebastiane (1976) [1h 26m– Written and Directed by Paul Humfress, Derek Jarman]
Sebastiane portrays the events of the life of Saint Sebastian, including his iconic martyrdom by arrows. The film, which was aimed at a gay audience, was controversial for the homoeroticism portrayed between the soldiers and for being dialogued entirely in Latin.

The filmmaker Micheal Robinson will be here to intro the film.

Win a chance to own a super cool poster! 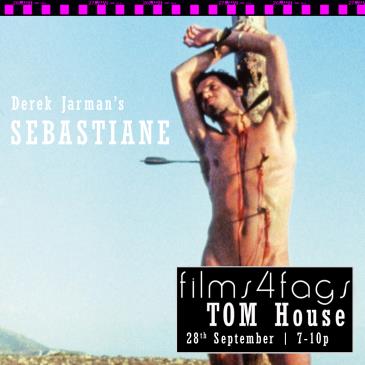