Films4Fags: You Will Never... / Daddy and the Muscle Academy

You Will Never Be a Woman. You Must Live the Rest of Your Days Entirely as a Man and You Will Only Grow More Masculine with Every Passing Year. (2008) [8m 44s – Zackary Drucker, in collaboration with Van Barnes, Mariah Garnett and A.L.Steiner]
In You Will Never Be a Woman, two trans-identified women share moments of love, insult, and masochism,exchanging both kiki and kai kai languages. Their syncopated exchanges oscillate from hateful to loving, blurring the distinction between lover and enemy – a position that both women seem to share. The two characters prepare each other for a larger, more dangerous culture of intolerance and violence, occupying multiple roles and preparing on all fronts as they appropriate and enact the fetishistic language of sex ads, assault the spectator, antagonize (“read”) each other, and ultimately regain their agency.

Daddy and the Muscle Academy (1991) [55m – Written and directed by Ilppo Pohjola, made in cooperation with Yle/TV2 and Tom of Finland Foundation]
Tom of Finland is one of the major icons of the gay world. His provocative erotic drawings have had an enormous influence on gay identity, attitude and self-understanding. This ground-breaking work combines interviews with Tom (prior to his death in 1991) and his leather men acolytes with hundreds of his original drawings and steamy fantasy scenes inspired by his work. The viewer is treated to hundreds of vividly rendered portraits of male models, ranging from “Drummer Daddies to fellow artists”. The film includes interviews with the artist’s models,associates and intimates, not to mention a dramatized journey into “Tom’s soul”.

Durk Dehner will talk about the film.
Win a chance to own the movie poster above! Posters will be signed by Durk Dehner. [Additional copies for sale @ $10] 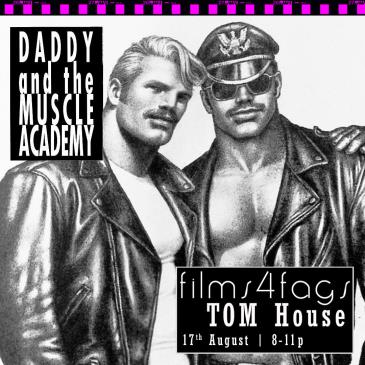