This is a fully-seated, limited-capacity show. The Main Floor will be set for table seating only. All tables will be sold in packs of four (4) tickets - meaning, your ticket price includes four tickets. The Balcony will be Bar Stool and Chair Seating only. All Balcony seating will be sold in packs of two (2) tickets - meaning, your ticket price includes two tickets. All main floor tables and balcony seating is on a first-come, first-seated basis. Your tickets will admit you to the section of the theatre you purchased — where you sit in that section will be determined by when you arrive. For the best seats please arrive early (See event images for a map of our seated sections). Masks must be worn in the theatre unless seated.

Smashing Pumpkins drum powerhouse Jimmy Chamberlin joins forces with genre-bending saxophone legend Frank Catalano on May 22nd at the Castle Theatre. Frank and Jimmy will be leading their all-star band for an evening of high energy not-to-miss music. Frank and Jimmy have released numerous critically acclaimed albums, their most recent being “Tokyo Number 9” which was recorded while touring Japan and debuted at #1 on the Billboard Jazz Charts. "Bye Bye Blackbird" was released in 2016, won an IMA award for best song “Shakin” at New York’s Lincoln Center, and also features David Sanborn on alto saxophone. "God’s Gonna You Down" was released via Universal Music France, spent over 20 weeks on the US Billboard Sales Charts, and was #1 on Apple Music. The series kicked off with 2014’s "Love Supreme Collective", which reached #1 on the Apple iTunes Charts and also features guitarist and Megadeth Alum Chis Poland as well as bassist Percy Jones.   Most music fans know Jimmy from his years of touring and recording with the Smashing Pumpkins and the hit albums: "Siamese Dream", "Mellon Collie and The Infinite Sadness", "Machina", this year's "Cyr".   More recently, music lovers may have seen Frank Catalano performing at Riot Fest with Violent Femmes, headlining the Chicago Jazz Festival with his own band or jammin’ with Les Claypool.  Frank was thrown into the international spot light as a teenager performing with Miles Davis, Tony Bennett, Louie Bellson, Charles Earland, Junior Wells, Randy Brecker, and Von Freeman.    "Frank Catalano is John Coltrane energy for the 21st Century" - DownBeat Magazine   "Jimmy's drum parts are so incredibly technical and nuanced that it's a rare class of drummers that can step in and play" - Rolling Stone   More info at catalanomusic.com. 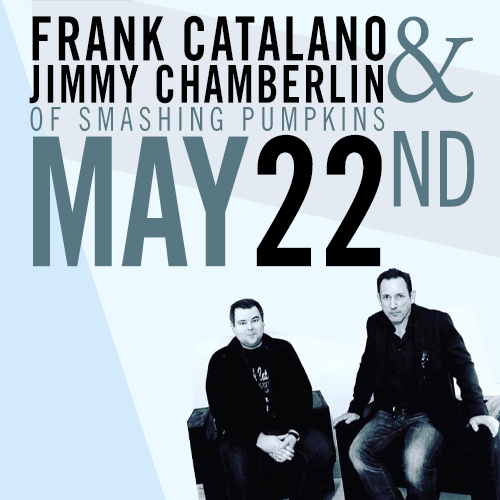