2020 marked the 30th anniversary of the existence of Fu Manchu. With the world locked down, the band postponed their world tour and focused on releasing new music and reissues of classic albums through 2021. 2022 will see the band releasing a new album and performing a headline tour in the US, another in Australia and 2 European runs with headline shows in France, Germany, Norway, Sweden, Switzerland, Belgium, The Netherlands and the UK (including the famed Shepherd’s Bush Empire in London).

Originally formed in 1985 as a Black Flag influenced hardcore punk band called Virulence, Fu Manchu has since become one of hard rock’s most celebrated names. The band released its first single, “Kept Between Trees,” in 1990 and, in the years following, helped give rise to an iconic style of heavy music tagged “stoner rock” alongside peers such as Kyuss, Monster Magnet and Sleep. Since the band’s inception, the quartet has built a fanatical army of loyal enthusiasts drawn to their guitar driven sound and carefree lyrics centered around “old muscle cars, choppers, vans, skateboarding and science fiction.” 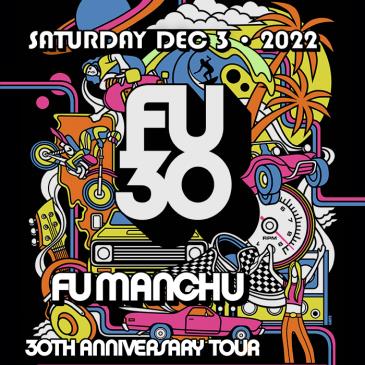