Join us with one of the hottest names in dance music, Futuristic Polar Bears, for their LA debut!

Coming in from a hot streak of incredible releases and support from super stars such as Dimitri Vegas and Like Mike, KSHMR, Dyro, and Hardwell, Futuristic Polar Bears have found themselves playing at the world’s hottest stages. The trio has seen their releases premiere on the biggest labels of EDM, including Revealed Recordings, Spinnin’ Records, Armada, and Harem, as well as consistently charting on Beatport Top 10 lists. As the hosts of the Global Radio Show, Futuristic Polar Bears are dedicated to bringing the best of electronic music to their zealous fans all over the world. Their mastery in live mixing is accurately reflected by the quality of their sets.

With Atomic Mike and David Steven opening for the night, the you know that the party is going to be one to remember! Decompress from the week with some banging tunes at AVALON Hollywood. 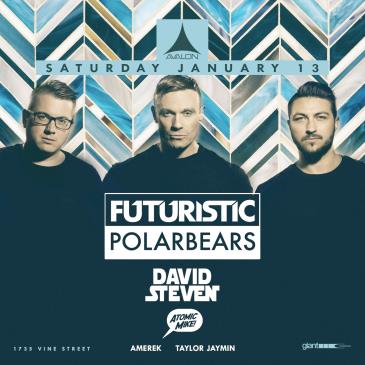