Groove 8 is a US based jazz funk collective. The band gotits start in Charlotte, NC where several jazz and session musicians formedrehearsals and jam session. The band encapsulates a 70s funk hybrid soundreminiscent of the UK acid jazz groups in the 90s. Groove has tourenationally and is celebrating its 15th year in 2021.

Søelle is a natural-born singer/songwriter/musician who began writing her own music (at age 8) as a way to cope with numerous childhood traumas. She believes that music is a form of therapy and is an advocate of mental health awareness. Søelle has utilized rich melodies in accompaniment with deep, meaningful lyrics to establish a style all her own. Being born in Texas, spending her childhood in New England, and planting roots in the Queen City (Charlotte, NC) as a teenager, her soulful and effortless style has been influenced by a plethora of various Soul, R&B, Rock, and Hip-Hop artists, the most notable being: Aretha Franklin, Fleetwood Mac, Queen, Citizen Cope, Alicia Keys, Eva Cassidy, Eric Clapton, John Legend, and J.Cole. 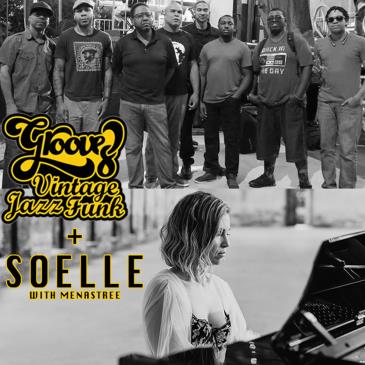