GSP (Glenn Strother Project)
...is bringing BOOGALOO to the BOOM BOOM ROOM on September 26. GSPis rolling into the Bay Area fresh of the release of “The Whitsett Boogaloo”, an album co-produced by AlanEvans of Soulive. Their self proclaimed “Rust Belt Funk” style is the by product of the roughneck style ofjazz that oozes from their hometown of Pittsburgh PA. Greasy guitar, howling hammond organ, and highflying horns coming together to create a thick wall of heavy funk.Since the mid 2000’s Glenn Strother and his bands have been a staple in the east coast jam scene.Although not a household name by first glance, the respect throughout the musician community isundeniable. Strother has worked and shared the stage with countless of todays top roots bands includingSoulive, Derek Trucks, Ratdog, Parliament Funkadelic, Rusted Root, and many more.Members of GSP have also toured regularly with Sharon Jones and the DapKings, St. Vincent, David Byrne,Melvin Sparks, and Poogie Bell Band. 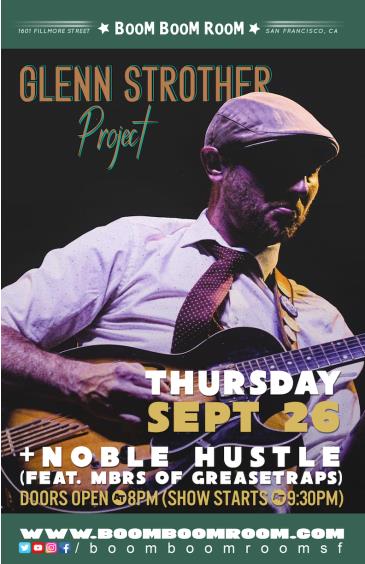