Gigmor Presents at The Mint

Melody Marshai is a multi-talented artist who is at the fulcrum of an evolving R&B scene. She is a very different and uniquely wired musician who isn’t afraid to break the rules and push the boundaries of our perception with her deeply layered lyricism and well-crafted production. Born in Mississippi and now based in Los Angeles, she has a drive, a focus, and a tenacity that will lead her to become a relentless and unstoppable force in the independent R&B circuit. Melody is making music that is driven by a desire to motivate, inspire, and tell her story her way. Music is the vehicle by which she expresses herself authentically. She writes lyrics that draw from her experiences and by using her musical acumen she articulates stories and shared perspectives that will connect with audiences across the spectrum. Music therapy for her and she seeks to provide a liberating and therapeutic experience for her audience as well. Melody Marshai combines various unique and experimental sounds with her intricate lyricism and often dabbles in multiple genres resulting in R&B -centered fusions that are still firmly stitched together by emotive undertones. Melody cites icons such as Sade, Anita Baker, and Mariah Carey, as the pivotal influences in her music. She also draws inspiration from Jazz and is avidly drawn to the concept of authenticity and being your truest self. She is a very hands-on and self-made artist who directs her own music videos and controls every aspect of her music. This all culminates in Melody Marshai producing an enjoyable, and easygoing musical experience that is authentic and grounded in reality. Her overarching ambition is to empower people through her gift and one day win a Grammy as a world-renowned artist. She is driven by the desire to share emotion through music and to impact lives positively. Melody Marshai has 2 singles in her discography namely “Pull Up” and “All Nite, All Nite” which showcase her distinct lyrical and storytelling prowess. She will be releasing her latest single a slow tempo track that will take listeners on a journey through various emotions and bring them to a place where they can escape the world and be lost in the music and be immersed in a very unique style and sound. It is music that heals and connects and will reach the core of our souls with substance and purpose. Her smooth vocals are decorated by effortless intonations that are accentuated by a skillfully resonated voice and soothing warm tones. She possesses a modern- day mix that crescendos with spellbinding emotive undertones. Her upcoming projects will highlight her passion and love for authenticity and vulnerability in her writing. She explores various themes by delving deeper into the emotions that encompass the human psyche. The talented enigma is here to reshape and leave an indelible mark in the industry.

Madeleine Mayi fearlessly goes after what she wants. As a deliberate and unapologetic writer with a voice as powerful as it is warm, her blend of indie rock and clever lyrics are nostalgia-inducing and wistfully honest. After releasing an EP and touring across the UK and North America by van, live performance became an integral part of Mayi's artistry; she took to songwriting on the road, which shaped the foundation of her project 2/14.

After the release of 2/14 in early 2021, she turned to a more literal writing style that led to “Light’s Out”, a song that details the kind of anger that can be felt after a bad breakup with a friend.

Throughout 2021 Mayi has been working on a batch of new songs that will shape into a project for early next year. The project will focus on describing bittersweet memories with radical honesty. Her attitude is best described in her own lyric “I don’t quit until I get my way.”

Blind Mirror is a Los Angeles based rock band consisting of lead singer Holden Glazer, guitarist Brandyn Juliyon, bassist Drew Esselstrom, and drummer Ryo Nakamura. The band combines multiple influences of classic and modern rock styles with their own sound. The first EP from the band, VIVID, was released in September 2021, and they are now in the process of writing and recording their first full album, to be out in 2022. 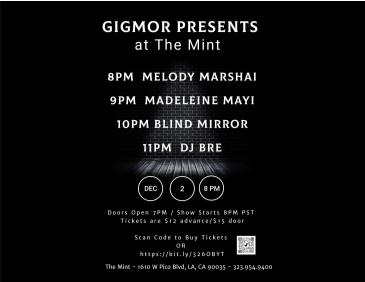