Gratefully Yours is a Grateful Dead inspired band, based out of New Paltz, NY. The band was conceived and founded in 2012 by keyboardist Alex Mazur, who is also the founder of The Deadbeats; one of the longest running Grateful Dead cover bands in existence.

However, “cover band” is an extremely misleading term when it comes to the music of Gratefully Yours. Their willingness and ability to improvise and their openness to spontaneity and the energy of the moment lie at the core of their performances and truly sets them apart. In the very best tradition of The Grateful Dead, it is this openness that allows the crowd to become a part of the creative process and results in a synergy between the band and the crowd that is unique and truly special. It is that magic that Gratefully Yours truly aims to “cover” and pay tribute to.

They also allow their audience to participate further by giving them the opportunity to submit their dream set lists, which Gratefully Yours just may happen to choose and perform.  But of course, you just never know what might happen…

And they have some very special guests and friends who have and do play with and sit in with them: Zach Nugent (Melvin Seals & JGB), Vinnie Amico (moe.), Tony Markelis (Trey Anastasio Band), Bill Carbone (Max Creek), Rob Eaton (Dark Star Orchestra) and Russ Lawton (Trey Anastasio Band). 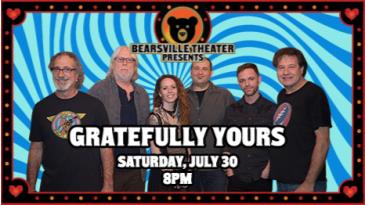