As we ease into our first shows back, we will not have food service in either The Lounge or The Music Hall at this time, but rest assured the bar will be open and the full drink menu will be available all night. As our kitchen warms up again, we look forward to expanding our culinary offerings in the coming weeks so you can enjoy the full WCL experience. Please note that If you had reservation in The Lounge, it is still valid.

Philadelphia trio Great Time, made up of lead singer and multi instrumentalist Jill Ryan, bassist/synth mastermind Zack Hartmann, and drummer/co-synth mastermind Donnie Spackman present the second of a series, a 5 track EP “Sounds Like____ [Vol 2]”.  Self-produced in quarantine by the band from their home studio built with money raised via Kickstarter, the band has largely ignored conventional wisdom and recorded from a genuine place of multi genre influence that sounds like something wholly original.

Says Ryan of the EP, "The idea behind this “Sounds Like” series of EPs is simple: We want to make what we want to make. We're inspired by tons of different styles and sounds, and we feel most genuine when we're creating music without any limitations or boundaries. The title is a response to the critiques we received on our first album.  Critics have suggested that we should pick a lane or a genre, and Sounds Like is our way of defying that while staying true to ourselves.”  Sounds Like Volume 2 explores the electronic pop side of the band's sound. Lyrically, the EP is made up of songs that express the frustrations of being a musician/artist, self-doubt, anxiety, obsessive thoughts and despite all that the urge to keep creating.

“Sounds Like____ [Vol. 2]” is the 2nd part of the EP follow up to the bands 2018 LP “Great Album”, also self produced from the band's home studio.  That album, along with a few followup singles, caught the attention of legendary radio voice and programmer Bruce Warren at WXPN, and three of their tracks have been in regular rotation on the station.  The band also got notice from NPR, EarMilk and Paste Magazine, with the latter saying, “Great Album ranges from ambient charm to thrashing rock.  But it doesn’t really matter.  Great Time are here for just that: a great time.”

The band was then catapulted to the forefront of the Philadelphia live music scene playing at prominent venues like World Cafe Live, TLA & Underground Arts before being asked to tour with national acts including Caroline Rose across the east coast and Midwest.  Prior to the 2020 lockdown, Great Time had set dates to open for Lawrence as well.

As the World and Live Music slowly reopens in 2021 the band has picked up right where it left off.  Ryan will sit in on saxophone for 5 sold-out Japanese Breakfast shows at Union Transfer in Philadelphia August 6-11.  The band will kick off a Regional fall tour with a 9/18 set at The Xponential Fest (WXPN) before a run in Philadelphia, New York City, Boston and Vermont. 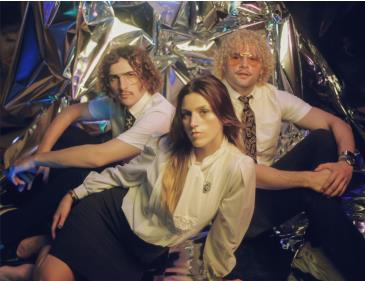