When guitarist and songwriter, Producer Groovey Pantesco plugs in his ’74 Les Paul Custom, he sets out on a journey. Sometimes he travels solo, navigating emotions and life’s dilemmas through each chord change; other times, he rides with other musicians, feeding off of that intangible energy created and shared between players and the audience.

Flashback to Miami in the 1980s(?), when Groovey was 15. He’d sneak out and steal his sister’s car to see the same band play every weekend, watching in awe. Inspired, he knew music would become a major part of his life.

Playing guitar now for about 30 years, Groovey has worked with various bands. He’s done plenty of small gigs, some of those are his favorites, and he’s experienced the thrill of opening for major headliners like Bon Jovi, The Black Crowes, Steve Morse and others. As a songwriter, he has co-written with Emilio and Gloria Estefan (Miami Sound Machine) and Emily Estefan for a soundtrack for the movie “Change of Heart”.

Now, Groovey is focusing on his latest effort, his new album, “Down The Road”. Recorded in Nashville in 2021 at the analog studio, Welcome to 1979, Groovey assembled a killer band of players. His longtime friend, Steve Gorman, founding member and former drummer of The Black Crowes, played drums; Robert Kearns (Sheryl Crow, Lynyrd Skynyrd) played bass; and Michael Webb (Poco) played (vintage) keys. As Groovey remembers, “Recording this album was by far the best fun I’ve ever had with other players. It felt effortless, like the songs just found themselves.” 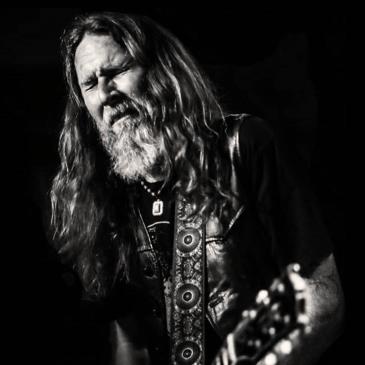