The Grown AF Comedy Show is real af stand up comedy for the grown and sexy crowd that loves to eat, drink, laugh, and mingle. The show features grown af comedians from Comedy Central, Netflix, HBO, Late Night and more. Come early for happy hour specials, and stay after the show to mix and mingle at the bar.

About the Host: Von Decarlo is a New York based stand up comedian, and author of the book, Speak Fluent Man. She performed at the Just For Laughs comedy festival in Montreal for Kevin Hart’s LOL Network, JFL Present’s LOL Live, and has been a featured comedian on Tru TV’s, Laff Mobb’s Laff Tracks, the Jerry O Show on FOX, and CNN’s year end wrap up special, All the Best/All the Worst. She was the first woman, and first comedian, to host her own show on Sirius XM NBA radio, which derived from her podcast, the Coach Von Podcast, in which she used sports to anchor into real life discussions about love, life, politics, and much more. She is a graduate of the UCB improv program, as well as a UCB diversity scholarship recipient, and her one woman show Lasagna debuted at The People’s Improv Theatre to a full crowd and rave reviews. You can catch her in global ad campaigns and national commercials for GNC, Disney’s Aladdin, and Carnival Cruise Lines. 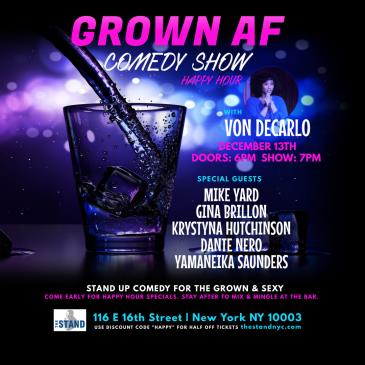