It’s a drum & bass invasion at AVALON’s CONTROL party this coming Friday, October 6. The weekly event pairs with Respect for a high octane night in Hollywood, showcasing incomparable talent from DJ Marky, Metrik and Ownglow. Hosted by legendary DnB MCs Dino and Machete, this stop on Hospital Records’ Hospitality Tour is set to turn out the AVALON dance floor.

Hailing from Sao Paulo, DJ Marky co-headlines the evening’s sounds alongside Metrik. Back in 2012, the DnB mastermind won the #1 DJ in Brazil RMC Award and picked up The Personality In Brazil award from RMC the following year. While only 28 years old, DJ Marky has made a name for himself in Brazil’s clubbing and dance music capital and is set to continue his Hospital Records legacy this coming Friday night.

Co-headliner Metrik is signed to Hospital Records and spins euphoric DnB during his current BBC 1 Radio residency. The London based DJ has enjoyed a summer playing countless shows around the United States, New Zealand and Australia. His recent single “We Got It” out on Hospital Records received celebrated remixes from S.P.Y and Bobby Tank. Before “We Got It,” Metrik’s 2016 album LIFE/THRILLS blended pop, hip hop and numerous more genres into his quintessential DnB sound.

Next up is London-by-way-of-LA artist Ownglow, who also fuses driving hip hop, soul and more genres into the DnB soundscape. Before Ownglow’s debut A Walk to Remember EP out on Hospital Records in 2016, the DJ’s first singles were released on Pilot Records. His blend of R&B rhythms with driving drum n bass energy generate a unique calm feeling, even at over 170 BPM.

Hosting AVALON s drum n bass filled evening is the iconic MC Dino, who has cemented his longlasting influence in the scene by emceeing for the likes of Pendulum, Nero, Skrillex, Diesel Boy and more. MC Dino is the co-creator of Urban Aboriginee Records, and has continuing ongoing liver performance projects in the works with Divine Elements.

Co-hosting alongside MC Dino is DJ Machete, whose involvement in the Los Angeles DnB scene spans over 25 years. Back in 1999, DJ Machete began booking talent and promoting for Respect, Los Angeles’ longest running DnB weekly party. In a legendary collaboration, DJ Machete brings Respect to the Avalon decks with what 6Blocc calls his “unmatched contribution to Drum & Bass” in America.

DnB fans unite under the AVALON roof this Friday, October 6 for a night of thumping bass and unmatched rhythms. Head to Hollywood to witness sets from DJ Marky, Metrik and Ownglow, with emcees MC Dino and Machete hosting the evening’s talent. 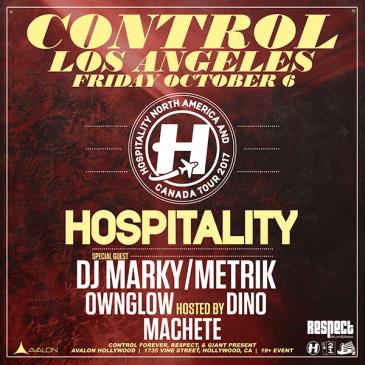