AVALON Hollywood is back with our annual Halloween Special on Saturday, October 28th, welcoming one of our favorites Dirty South and Randy Seidman back to the stage!

Dirty South, his real name being Dragan Roganović, is a Serbian-Australian record producer and remixer based in Melbourne. As a world-renowned DJ and two-time Grammy nominated producer, Dirty South is well known for his hit album in 2014 titled ‘With You’. Set to release his newest album this year, Dirty South has collaborated with a variety of other well-known producers such as Alesso and Axwell and his music is further supported by labels Anjunabeats, Axtone, and Vicious Vinyl. Known to be a global festival headliner having performed at some of the biggest EDM festivals around the globe, AVALON Hollywood is proud to welcome back Dirty South.

Supporting Dirty South is Randy Seidman, one of the hardest working electronic music artists in the beautiful city of Los Angeles. As the top support choice for Trance megastars, Infected Mushroom, Seidman has performed at over 450 shows with the megastars, performing worldwide and winning “Breakthrough DJ/Producer of the Year” in the well-known DJ Mag Top 100 poll. Seidman holds a monthly residency with us here at AVALON and he will be sure to throw it down for us on this special Halloween night.

Get down and get freaky with us this Halloween night at AVALON Hollywood on Saturday, October 28th, presenting sets from Dirty South and Randy Seidman. 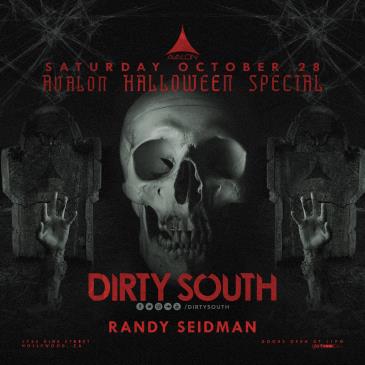