Control AVALON rings in the spring season with Henry Fong as he embarks on his Cowabunga Cali Coast Tour with Jinco along with support from D-SAB, Maxo and MUNZ.

Henry Fong characterizes an ambitious quality since he paved his way to LA focusing on music production. Recognized for implementing melbourne bounce with elements of Reggae, and Hip Hop he can curate some scandalous EDM tracks. Skillfully blending the variety, he receives the likes and has collaborated with artists like Milo & Otis, Hardwell, Avicii, and Bad Royale.

Performing alongside with Henry is the talented producer and DJ, Jinco. Best known for his ‘CinemaTrap,’ Jinco is creative producing emotional instrumental tracks with heavy bass drops. The deliverance is great and reflects with releasing singles like ‘I Wonder’ that generated over eight million plays on musical platforms including Youtube and Soundcloud.

Returning to Avalon is LA native D-SAB. Anyone who catches a performance of his is bound to headbang due to his dirty and grimy sets. He remixed ‘By My Side’ by Slushii and Ookay that was without a doubt a game changer. Don’t miss out on his set that will be irresistible to the ears.

Easing you into the night will be AVALON residents’ Maxo and MUNZ. The LA local talent, will be delivering back to back performances to get the party cranking.

So grab your tickets, and get ready to get loose. Control AVALON is guaranteed to convey one hell of a party with Henry Fong, Jinco, D-SAB, Maxo and MUNZ. 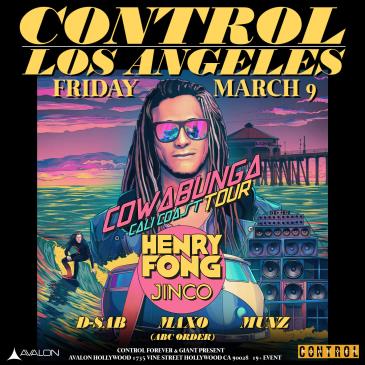