When you think of Texas, what comes to mind? Big skies? Big trucks? Hot women with big… uh, well… big hair? Everything, as they say, is bigger in Texas… And that what ain't bigger is more bizarre. After all, in a state that refers to itself as a republic… things can get pretty skewed.

This Austin Superboogie trio was founded in 1996 by long time Butthole Surfer, part time MELVINS bassist JD Pinkus, Bobby Ed Landgraf (DOWN, Skrew, ...) on guitar, and rounded out by Trinidad Leal (Dixie Witch) on them skins.

Honky dishes out an appetite pleasin'… Superboogie servin' that'll keep ya' comin' back for more. Austin's favorite sons have released some of the best stripped down, butt shakin', rock ever cut to wax, tape, or cd. They have toured with Down, Nashville Pussy, the Reverend Horton Heat, Fu Manchu, Melvins, Peter Pan Speedrock and David Allan Coe.

Honky's newest release, Corduroy, is another feast of down and dirty rock on Phil Anselmo's Housecore Records. Thick enough to eat with a fork but you'll wanna keep a spoon handy so ya don't miss out on that gravy… Drum duties are handled by a more then qualified group of drummers, Trinidad Leal (Dixie Witch), Michael ‘Night Train' Brueggen (Blackula, Syrup, Supagroup), Dale Crover (Melvins), and even Original Honky drummer, Lance Farley, makin' the grooves proper... Guest appearances by Mark Gonzales and the Fantasma Horns, as well as backup vocals by our favorite Honkette, Rae Comeau. 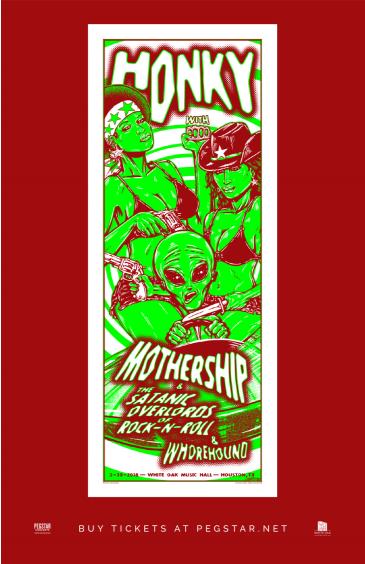