Hook N Sling, personally known as Anthony Maniscalco, is the one man dance star that has made waves in the music world over the years. He is making his long-awaited return to AVALON on 6/24.

Hook N Sling is an Australian multiplatinum ARIA-nominated record producer, songwriter and DJ who now lives in Los Angeles, California. The artist has released on some of the most prestigious dance labels out there, including Spinnin’ Records, Hussle ‘N’ Bussle, Doorn Recordings, and more. Having collaborated with Galantis and Sam Feldt, and having remixed acts such as The Chainsmokers, Hook N Sling has slid his way into the top.

David Steven, Ted Nazarian and Atomic Mike will be opening the night. Atomic Mike is no stranger to AVALON. The Los Angeles resident has made himself a reputation of being the go-to opener and is the master of warming up the room. Progressive/Deep house producer and DJ Ted Nazarian will be providing additional support for the night. 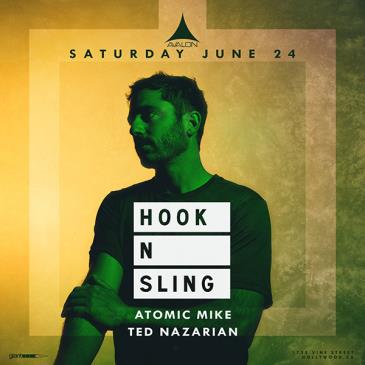