An old soul hailing from Macon Georgia USA, Hughes Taylor was immediately drawn to the blues when he first picked up the guitar. Two decades later, he’s become an acclaimed guitarist and songwriter playing a fiery brand of blues-rock whose power trio lineage stretches back to Stevie Ray Vaughan, Cream and Jimi Hendrix.

His 4th and latest studio album, Modern Nostalgia, is a showcase not only of his signature style as a guitarist but of his overall evolution as a musician, songwriter, and producer. Written during the pandemic and recorded at the legendary Capricorn Sound Studios, it’s a sweet mix of blues, blues-rock, and southern rock; a modern successor to the great music that put Capricorn on the map many years ago. Modern Nostalgia was released on CD in July 2021 and has been on the US Blues-Rock Top 50 Album Chart every week for the past 16 months. A limited-edition double vinyl edition was released in June, 2022

The Hughes Taylor Band have a 5th studio album in the works and will be debuting some of the new music at their upcoming shows. 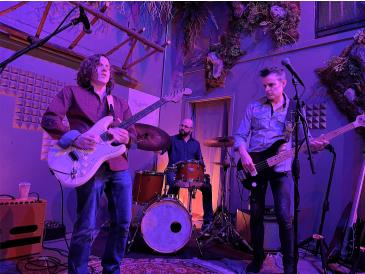