Re-enactment of societal activities in Hungary, with musical performances and recited political speeches that surround the absurd exploitation of acacia, an indigenous American tree that became a national and political symbol in Hungary.

The acacia, an indigenous American tree appropriated as a national symbol in Hungary, has become a subject of contemporary debates concerning politicians’ branding of the tree and distortion of environmental facts. The absurd exploitation of a plant for political means drove Kristof Kelemen and Bence Gyorgy Palinkas to launch a movement aimed at rebranding the acacia into a symbol of an inclusive society. Planting events took place at nationally significant locations in order to promote the liberal ideals of a community.

Hungarian Acacia will be also featured in Rehearsal for Truth, https://www.rehearsalfortruth.org/program/hungarian-acacia on June 24, 25 The performance is followed by a talkback.

Free and open to the public. Online registration through Eventbrite is required. Wearing a face mask inside the venue is required.

The 2022 Voices International Theater Festival is dedicated to the people of Ukraine fighting for their independence. 🇺🇦 Suggested donation ($20) will be used to support Ukrainian artists. All collected funds will be donated to National Academic Lesya Ukrainka Theater. 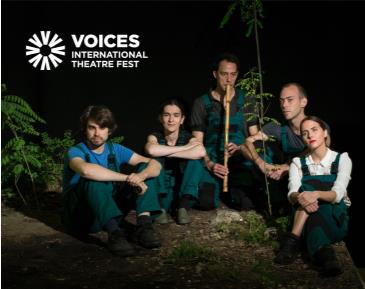