Composer and singer-songwriter Ilan Isakov was born in South Africa, grew up in Philadelphia, and is currently based in Oregon. His film scores include Emmy-nominated Ai Weiwei: Never Sorry, Netflix original documentary Take Your Pills, and most recently HBO’s Alanis Morrissette documentary Jagged. His songwriting credits include "Second Chances" featured on Veronica Mars and “Words” featured on NBC’s Private Practice.

A strong supporter of community among musicians, Ilan started a (sometimes-) monthly house concert featuring a rotating cast of artists from all walks of life, called “Ilan Salon.” The salons were a chance to build community, and served to provide local and traveling musicians an open, intimate environment to share and hone new material. The added benefit for Ilan was that the pressure to have something to perform at the Salon was the impetus for writing plenty of new songs.

Many of these made it onto his debut album, Straight Lines, recorded over several sessions in Philadelphia and at Pineapple Room Studio in Kerhonkson, NY, and released in November 2021.

There’s a brightness to Ilan’s songs on Straight Lines that belighs the melancholy of his story telling, from the joyous recorders and handclaps in “Till the Questions Were Gone”, tothe snappy brushes on paper and melodica on “Sing What We Cannot Say”, toIlan’s idiosyncratic voice climbing impossibly in “Fugitive’s Dream”. Some songs make you want to dance, some make you want to cry, some will pass through you like a long breath, but all bring you closer to the space where sorrow and joy hold hands.

Both the opening track “Till the Questions Were Gone,” and the closer, “Sing What We Cannot Say,” are odes to ineffability itself. They speak to music’s special power to lay bare our emotional landscape. The music on this album touches that mystical place, like postcards from the human heart.

Of Straight Lines, Ilan says, “I love these songs. Of the many I’ve written, this collection written over a period of fifteen years are the ones that stuck around, that continue to grow with me, that grant me peace in unforeseen circumstances, that mean something to me, and whose meanings I am still learning. It felt very important that there be a record of these songs, and that it come from my voice.”

Straight Lines was engineered, mixed, mastered and co-produced by Tom Deis (Via Audio, Falsa, UniIka Ai) who also lends his talents as a multi-instrumentalist. The album also features vocals by Nat Tate and Gregory Alan Isakov, drums by Daniel Freedman(American Utopia), and viola by Hannah Nicholas.

Ilan is hard at work recording his second album, which will include at least one murder ballad. 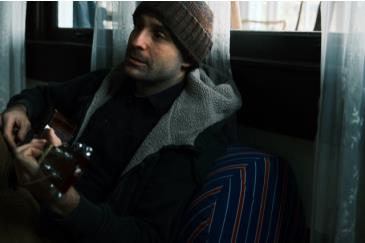