‘Really sorry to have to do this but due to circumstances beyond our control the forthcoming US dates are moving from September to November … apologies for any inconvenience this causes, all tickets are valid for the new dates and refunds are available if required. Thanks again for all your support, really can’t wait to get over to the US. It’s been too long x’
***All tix purchased for Sept 19th will be valid  for the Nov 20th show.  If you cannot make the new date you have until Sept 24th to request a refund at point of purchase.  Thank you.﻿

Let’s take a trip back to the old world, to February 2020. Inhaler are just back from a triumphant tour in Japan, another set of dates to add to the feeling that something special is building. The Irish quartet are on the crest of a wave. Over the previous year, they have released a series of blistering singles – the new wave grandeur of It Won’t Always Be Like This, the synth-pop swagger of Ice Cream Sundae, the expansive indie jangle of We Have To Move On – and now singer and guitarist Elijah Hewson, guitarist Josh Jenkinson, bassist Robert Keating and drummer Ryan McMahon are turning their thoughts to nailing down a definitive debut album. The songs are ready, intricately crafted at home in Dublin and then honed to perfection in venues around the globe, and the flights are booked. And then the world hits pause. Everything stops.

“We were on such a good trajectory and then it was just ripped right out from under our feet,” sighs Hewson. “But you just have to land the way you land. We can’t change it.” “The biggest part of our band is just the camaraderie of it all because we’ve been friends for so long,” adds Keating. “It was weird to go from seeing each other every day, constantly, to not that much at all.”

Slowly, though, Inhaler wrestled positives from being grounded. Initial frustration and withdrawal symptoms from best mates used to living in each other’s pockets gave way to a creative burst. They reshaped and reimagined their debut record and emerged with an album with renewed scope and imagination. Titled It Won’t Always Be Like This, it is the sound of a young band finding new levels. “Lockdown made us able to write five new songs,” says Hewson. Inhaler found that years of writing songs round each other’s houses after school and at weekends had given them an alchemy that could be replicated digitally, temporarily at least. “We did online Zoom writing sessions with each other,” says Hewson. Inhaler’s debut could go down as a historical document of the WFH era. “We’d share our screen on Logic and press play. It was kind of weird, but it worked for a while.”

Often bands enter the studio to make their first records riding high from the thrill of playing live, with songs sometimes taking a backseat to what becomes an exercise in replicating that fevered exhilaration. But being denied the chance to gig (not an experience they have enjoyed, understandably) opened up the four-piece’s approach.

“It really put things in perspective for us,” says Hewson. “We were on a bit of a crazy train of being like, ‘what’s next? What’s tomorrow?’, not really seeing the bigger picture.” Everything coming to a halt gave the group an opportunity to adopt a different outlook on how they wanted the record to sound, a chance to think, ‘what do we want it to sound like? What do we want it to say?’. It might sound obvious, but really – have you ever heard of a band in the middle of a meteoric ascent and having the time of their lives go, “whoa, hold on, can everyone just take a minute?”.

“We really had the opportunity to explore our sound and plan out the next couple of years,” says Hewson. McMahon adds that lockdown was spent questioning every aspect of their music: the sound, the lyrics, how it all tied together. It honed these songs to their most essential versions. “The songs are more fully-formed and more sure of themselves. Had lockdown not happened, there would have been a lot of unanswered questions left hanging in the air,” says McMahon. “We explored all the different territories that were there to be discovered.”

It was over last summer that they finally entered Narcissus Studios in Willesden, London, with long-term collaborator Antony Genn to get to work on the record. Covid restrictions meant they was no extra-curricular japes - they weren’t allowed to visit friends so spent every day for a month and a half in the studio, an intense and full-on experience where they put down the foundations of the album. “Then we went back over in September,” says Jenkinson. “That’s when we really got all of the work done. By that point, it was focused work rather than vibing on different news songs.” An extended period of to-ing and fro-ing about mixes and tracklisting has recently come to an end. It Won’t Always Be Like This is finally complete. “I’m so happy that we did it, that we could get it done,” beams Hewson.

After all the reflection and pulling apart and putting back together of their songs, it makes sense that the single to herald their record’s arrival should be one of the band’s oldest tracks. Cheer Up Baby dates back to the period when the band wrote the album’s title track, and now it is captured as the perfect example of everything Inhaler do best: anthemic hooks, yearning vocals, spidery guitar lines building to their most epic expression, all underpinned with a rhythmic propulsion. “I remember the first time we played that song, it was St. Patrick’s Day, 2017,” says McMahon. “We weren’t very tight as a band but the song was there and people were really relating to it. We knew there was something good in it.” “Even if we were playing in a dingy bar to 10 people, you could tell that people would perk up to it,” says Hewson. “It’s just a great pop song, and I think it really takes us back to our roots as a band.”

Four years later, listening to the way it blossoms into that soaring chorus, it sounds too expansive to be contained by any dingy venue. It’s the sound of Inhaler matching their ambition with refined songcraft and dynamic studio wizardry. “I think it just has that classic, feel-good, anthemic, hopeful feeling that everyone seems to relate to on some level,” says McMahon. When Hewson listens to it, it makes him feel nostalgic for the band’s early days, for nights spent lugging gear in and out of venues, talking to girls after gigs. The song has lived through so many moments and memories he can no longer remember what it was originally about.

And the moral of the story is that it’s not really about anything and it’s also about everything. It Won’t Always Be Like This captures the joy and exuberance of being young and all the fretting that follows, the sense of adventure, the feeling that if something’s worth doing, it shouldn’t have to wait until tomorrow. It’s a framing of life in your late teens and early twenties. They had to wait for their moment, but Inhaler were ready when the time came. They got it down. 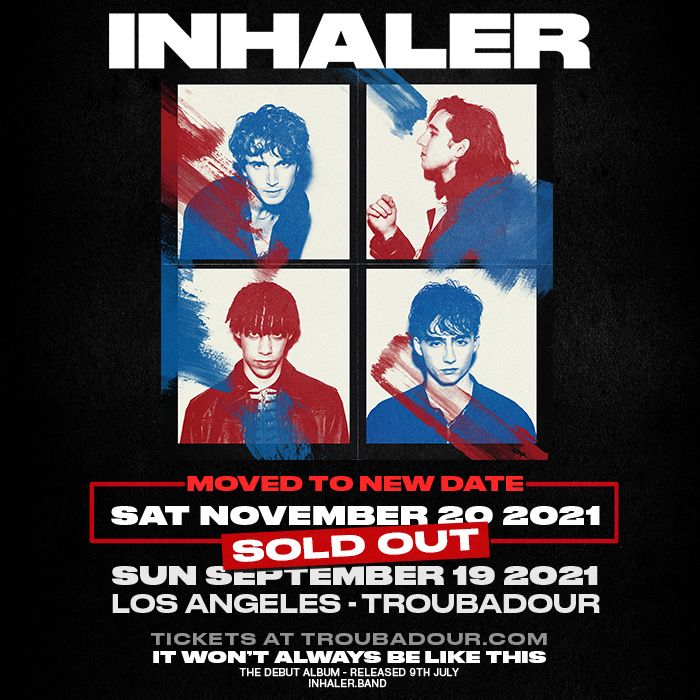