The Dishonorable Reverend Jeff Leach (BBC Comedy/Comedy Central/Savage Snowflake Podcast) leads a stand ups anonymous meeting in which audience and comedians alike will find spiritual healing through the medium of laughter. In this festival of frank-ness, you will be introduced to the the ’12 Steps Of Funny’ with comedy prayers, stand-up ‘shares’ and audacious admin. During the meeting, the ‘Rev' will welcome some of the greatest comedy talent on stage to share two stories, the first about how drink, drugs and sex have ruined their lives in the past, the second about what these gag-merchants are now grateful for in life. We’ll laugh, we’ll cry, we’ll share way more than we should… and then we can let the healing begin!

with his 'SUA Secretary' Jonas Barnes

(Producer of The ‘SMUT' show / SiriusXM)

(Comedy Central / Letterman / Conan)
Please arrive 30 minutes prior to check in to guarantee seating. Seats are subject to be released 15 minutes after the show begins. ALL LINEUPS SUBJECT TO CHANGE WITHOUT NOTICE 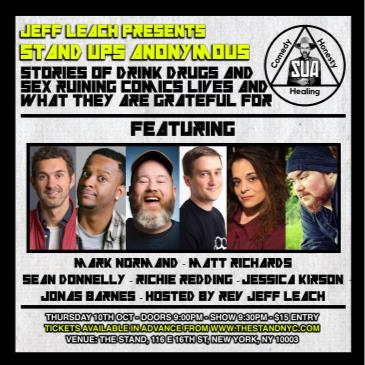