About JP Soars & The Red Hots:

Playing the blues not only requires diligence and dedication, but also an inherent sense of purpose and passion. Guitarist and vocalist J.P. Soars knows those instincts all too well, having been imbued with absolute enthusiasm for the form. It’s not only steered his muse ever since, but also brought him to the heights of success and wide recognition. A first place winner of the Blues Foundation 2009 International Blues Challenge, the Albert King Best Guitarist Award, any number of Blues Music nominations as Best Contemporary Male Blues Artist, and a nod for Best Blues Album, he’s been the recipient of continuing critical kudos, extensive worldwide airplay and sales that have elevated him to the uppermost rungs of every major Blues chart.

Of course, Soars and his powerhouse trio the Red Hots — including drummer Chris Peet and bassist Cleveland Fredrick — are no strangers to live performance either. Soars and Peet have played together for the past 16 years, while Fredrick, “the new guy,” has been with the band since 2016. They’ve proven their mettle on stages both nationally and internationally, played blues festivals from Belgium to Brazil, and shared stages with the likes of Buddy Guy, Joe Bonamassa. Brian Setzer and Larry Graham.

“I consider myself both blessed and honored to get to play music for people,” Soars says humbly. “It’s a privilege. I am extremely grateful and I never take it for granted for a minute. I love putting smiles on folks faces and maybe help some folks forget about their troubles for a while. Seeing people dancing,  and having a good time puts a smile on my face.”

Soars may be modest, but even so, it’s little wonder that his reputation is so revered. It prompted Bruce Wheeler, producer of the ever-popular Heritage Music Festival to recently write, “I’ve always been a proponent of live music. The “magic” that happens when the chemistry between musicians… is something that cannot be put into words. That is exactly what I said after experiencing the performance of JP Soars Gypsy Blues Revue at the 2021 Heritage Music BluesFest. See them when ever you have the opportunity.”

Happily, Soars is never at a loss for activity. A dedicated multitasker, he has also performed with the all-star blues ensemble, Southern Hospitality, a band that includes singer/keyboard player Victor Wainwright and vocalist/guitarist Damon Fowler with Chris Peet on drums and Matt Walker on bass. Not surprisingly then, their 2013 debut album, Easy Livin’, garnered a a Blues Blast Award for Best New Artist Debut Release. Soars says plans are afoot to reconvene soon.

In the meantime, Soars can claim an impressive catalog of his own, encompassing half a dozen albums released over the course of nearly fifteen years — Back Of My Mind (2008), More Bees With Honey (2011), Full Moon in Memphis (2014), J.P. Soars: Live From the Netherlands (2015), Southbound I-95 (2018), and his latest, Let Go of the Reins (2019), produced by Tab Benoit. The latter garnered some of the best reviews of his career, with Blues Blast Magazine describing it as “A super set of tunes that will make your summer travels a lot of fun as you savor this CD over and over again. I highly recommend it!” No Depression added its kudos as well, proclaiming “Soars has put together a rowdy, swampy package bustin’ at the seams, ready to get loose and spread the red-hot glory emanating from his fingertips.”

Then again, Soars was inspired by the best. At the age of 19, he found himself the recipient of a guitar and tickets to see the great B.B. King in concert, after which he was given an opportunity to meet the legendary musician backstage. After a brief flirtation with heavy metal, Soars realized that he best excelled at basking in the blues. Not content to merely share his playing prowess, he also builds his own cigar box guitars and compact 9 volt battery-powered amplifiers, which in turn, have become prized one-of-a-kind collectors items treasured by aficionados worldwide.

Still, Soars isn’t one to take his success for granted. In fact, he remains firmly grounded, not only in his love of the music, but his appreciation for his fans.

“When someone comes up after a show and says ‘thank you’ or ‘I feel what you do in my heart and soul,’ This is the greatest compliment for me,” he reflects. “It gives me a sense of purpose and I know I’m right where I should be doing exactly what I am meant to do. The good Lord gave me a gift and I love sharing it with the world. 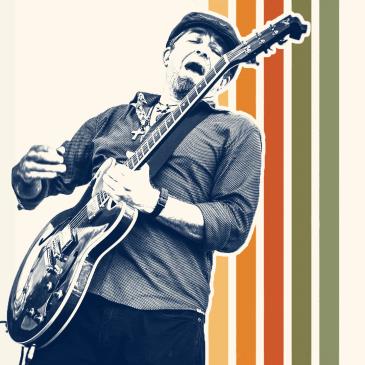