By all accounts, Roy English, the creative spirit behind Jagwar Twin, had been chewed up and spat out by the industry, with the singer-songwriter dropped from multiple major labels in his career. Often hidden in the background, despite a clear longing to lead from centrestage, the artist knows what it’s like to sleep on friends’ sofas after late nights playing small bars as if they were Madison Square Garden.

“From my childhood to being an adult, there has been this recurring theme of feeling misunderstood” the artist sighs. “People would make fun of my voice, which to be fair was really bad at the time. I never fit in with ‘the boys’ ... or the girls really, and my music never fit into an industry box. But even when I was literally a starving musician, something inside compelled me to keep going.”

Underrated 2019 album, Subject To Flooding, aligned with a period of project-defining production work and song collaborations with the likes of Matthew Pauling, S1, Travis Barker, and Jeff Bhasker. But if Subject to Flooding represented an artist working to figure out who they were before the pandemic storm, then new album 33 grew out of planted seeds in the flood rich soil; the underdog is coming for his crown.

“My hope is that the stories on 33 will show the listener to the listener,” is English’ fundamental ambitious aim with the new project. “It’s about showing possibilities beyond the grid we’re currently living in and, I guess, how a 33-year-old failed influencer finally found their voice in this digital-first world. I want to make music that makes me want to dance, too.”

33 is a bold statement filled with intention that more than lives up to its creator’s lofty ambition, with 10 addictive songs that stomp forward with attitude like Queen at Wembley Stadium in 1990. Each song is a mini movie that powerfully tells an emotional story of coming of age in the social media era, as English’s towering vocals channel the galvanizing showmanship of a Bad-era MJ and Bowie’s Ziggy Stardust days.

Lead single “Happy Face” earned English a coveted spot on the YouTube’ ‘Trending Artists to Watch’ list at the start of 2022. This song is a defiant, ricocheting ball of energy, as the artist sardonically harmonizes about the fake smiles we’re forced to wear in the digital sphere. It’s like Orwell’s Nineteen Eighty-Four with disco lights, and surpassed the total streams and reach of previous major label single ‘Loser’ at four times the speed, despite its humble $0 marketing budget. “Tick Tock, Tick Tock, ticking like a time bomb!” he chants, almost sarcastically. This powder-keg of stadium rock also touches on the emotional baggage we create while smiling to curate our digital selves.

A hyperactive melodica rages over a break beat as English howls about the “death of my generation”. For the award-winning smile-triggered digital experience of “Happy Face”, users were forced to hold a smile while watching a series of dystopian images on their screens. With this being the only place to hear the song, fans that lost a smile would cause the screen to melt, but smiling for the duration would unlock a limited edition merch capsule.

He insists the independent single, which recently crossed 21 million streams on Spotify (and growing) and also graced YouTube’s top 100 songs list, ultimately acts as a hopeful rallying call. “I want to show there’s a way out of this collective fog and into something better,” says Roy. “But that is something everyone has to find for themselves.”

On the flamboyant “I Like To Party”, English muses about how all we want to do right now is “Zoomy Zoom Zoom” and “stay in and pretend” due to our collective pandemic anxieties. While the kaleidoscopic funk of “Pay Attention”, which echoes the euphoric bassline of Patrice Rushen’s 1982 classic “Forget Me Nots”, is English’s commentary on the currency of attention (“Everybody gotta pay me. You gotta pay Attention”). Both of these songs sound like Billboard Top 100 hits, and their sentiment mirrors the singer’s own journey from an industry outcast to leading a sea of change in popular music.

The rising artist hopes this upcoming record can spark an internal awakening (“Light the flame on the top of your head” he urges on “Down To You”), leading listeners to see themselves more clearly within today’s always-on digital culture. “Michael Jackson, Bowie, Madonna, and Freddie Mercury created revolutions in the middle of sweaty dance floors, where people were having the time of their lives,” he says. “I know it’s ambitious, but that’s what I’m aiming for too.” English worked with grammy-nominated producer Matthew Pauling (Twenty One Pilots, 5 Seconds of Summer) to bring the music to life, which he recognises as: ”Incredibly rare chemistry. We both push each other [in the studio] in ways that create something bigger than either of us as individuals. He does things that I would never think to do.”

Jagwar Twin also wants to redefine independence, showing a different path to success without major label backing. “I believe we're coming into an era where new ideas, feelings, and authenticity will be valued again,” he enthuses. “An unknown, undiscovered artist, with no backing, money, or traditional promo can "make it" if they create something compelling. NFTs and blockchain unlock a whole new paradigm for artists to tell stories where fans are incentivized to help build and grow a community,” English says. “But I also want people to question the utopia of independence and Web3 and learn from the mistakes of Web 2.0. We can’t move into the future naively.”

To understand Jagwar Twin, I guess you have to look backwards. English says he was bullied at school, and he embraced ballet while the other boys were more occupied with sports and video games. He says he grew up serenaded by the lucid new romance storytelling of Joni Mitchell and Bob Dylan, who the singer’s mom played around the house. This is why his music is always underpinned by three-dimensional storytelling. “Music provided an escape and a pathway to discovering who I was. I love telling stories with my voice. When I tell a story I believe in it's like there's a fire in me that comes out through my voice.”

As this ambitious new album progresses, English’ confidence seems to blossom, with anthemic highlight “Your Soul Is A Star” containing the cathartic line: “Your soul is a star, it’s alive, I can see it. Do you know who you are?” The unwinding journey of “Another Way To

Heaven” also appears to mark Jagwar Twin’s evolution, as he sings “But who was I to know? I wanted to see myself and where I could go.” The campaign around 33 will be brought to life through a set of digital experiences that fully immerse fans in this story, using NFTs as keys to discover, collaborate, and share in Roy's journey to unlock what it means to be an artist in an influencer-driven online culture.

Mixed by Jeff Ellis (Frank Ocean, Doja Cat), English hopes the stories on 33 will serve as a catalyst. “With 33, I want to show that popular music can push boundaries and unite,” he concludes, “while giving space for a new generation to look inside and reimagine their own world.” Jagwar Twin’s new dawn has only just begun ... catch up if you can.

Little Luna is on the journey to re-discovering her truest self, giving you sounds & words to do the same! her music is inspired by the culture of the 70s, & the peace that comes with meditating. with over a million combined streams, air time on Alt 98.7, and her debut EP “through the self” releasing, she is ready for the next step: playing live for you! 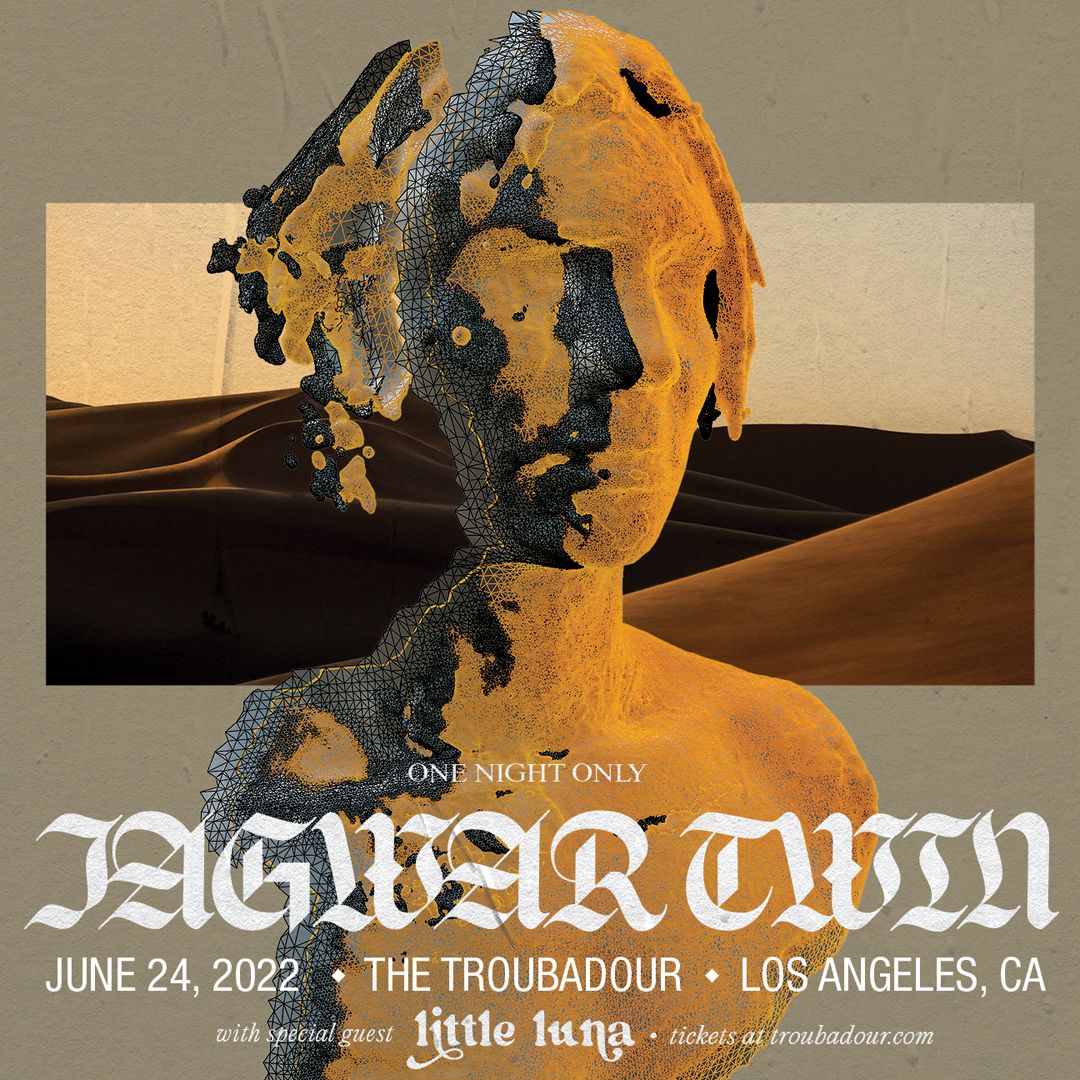